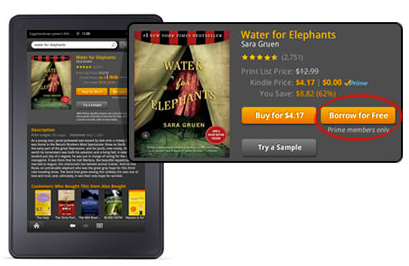 Amazon.com has expanded to more than 100,000 titles the library of e-books available for borrowing at no extra charge by Amazon Kindle owners who subscribe to the company’s Amazon Prime subscription service.

The new total, announced in a news release this morning, represents a significant jump from the 5,000 titles available through the service when it launched in September. That meager selection has been one of the biggest challenges facing the service, reflecting the lack of participation by the biggest U.S. publishing houses.

Amazon said today that the catalog includes more than 100 New York Times bestsellers — the same number that was cited at launch.

Under the Kindle Owners’ Lending Library program, people who own Kindle devices (not Kindle apps on third-party devices) can check out one eligible book at a time, as frequently as once a month, with no due dates, if they also subscribe to Amazon Prime for $79/year.

The program is separate from the system for checking out Kindle books from public libraries.