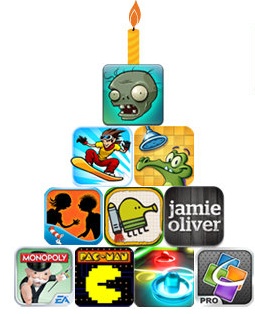 Amazon’s Appstore for Android has been in business for a year now, and the company is marking the occasion with a bunch of deals on apps and games, and a sweepstakes offering a chance to win a Kindle Fire.

And yes, they’re still calling it an Appstore. GeekWire marked the occasion of the Amazon Apptore’s anniversary by checking in on the lawsuit filed by Apple against Amazon over the “app store” trademark. In short, it’s still making its way through the courts.

In case you’ve forgotten the details, this is one of the more unusual legal disputes of the modern tech era, involving one of the most widely used phrases of the digital economy.

Apple contends it has the exclusive rights to use the phrase app store, and that its competitors can use other names, such as market or marketplace. (Or “Play,” apparently.) Amazon calls the phrase “app store” generic and not something that Apple can claim for its exclusive use.

The update: The docket shows the case still pending in federal court in Northern California, with lawyers for both companies conducting discovery, and a jury trial tentatively set for October.

In the meantime, U.S. Patent and Trademark Office records show that Microsoft’s related dispute with Apple over the term is on hold pending the outcome of Apple’s lawsuit against Amazon.

Amazon say its Appstore for Android now has 31,000 apps, up from 4,000 at launch. Top apps over the past year include Angry Birds, Cut the Rope, Where’s My Water, Netflix and Solitaire.