Sprint Nextel may be trailing rivals such as AT&T and Verizon on a national basis. But the third place carrier in the U.S. has the best network in Seattle. At least that’s the finding of a new report released today by RootMetrics, the Bellevue company which measures dropped calls, data speeds, text delivery times and other attributes of wireless networks. Sprint was followed by T-Mobile, Verizon and AT&T.

Sprint is making its mark on speed, helped in part by its partnership with Kirkland mobile broadband company Clearwire. According to RootMetrics, Sprint had the only network of the major carriers which recorded download speeds of 10 Mbps or higher. Its average download speed came in at 3.8 Mbps, which was nearly twice as fast as second place finisher T-Mobile which scored an average download speed of 1.9 Mbps.

Overall, RootMetrics discovered that wireless networks in the Seattle area are fairly reliable, up more than 95 percent of the time. But when it comes to dropped calls, there’s clearly two big losers.

The report is especially interesting given the planned merger of AT&T and T-Mobile. As seen in the accompanying charts — at least as it relates to Seattle — the two networks are at the bottom of the charts.

This is the first of RootMetrics’ reports on major U.S. cities, with other reports to be released later this year for Dallas, Miami and other cities.

[Correction, Tuesday afternoon: AT&T was measured based on its 3G HSPA 7.2 network. RootMetrics CEO Paul Griff said Android 2.2 devices were used in all of the testing, limiting the options among AT&T devices at the time of the testing to the Nexus One, which connects to the HSPA 7.2 network but not the “4G” HSPA+.

Griff said RootMetrics consulted with AT&T on the decision, which agreed that the Nexus One was the most appropriate device to use, showing the network in the most favorable light possible while keeping the playing field level.

AT&T registers the top “Root Score” in the Seattle region based on RootMetrics’ consumer maps, which include data inferred from mobile users, but Griff said the data in the latest testing was collected in a more controlled manner, by RootMetrics teams conducting direct tests of a variety of network conditions.

Verizon was also measured in the latest study based on its 3G network.]

Here’s a look at how Sprint is crushing the competition on download speeds: 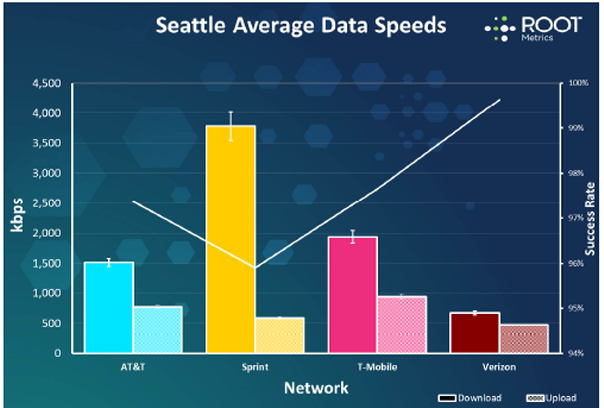 Previously: “Rewind: Why your wireless coverage stinks, and how it could improve”