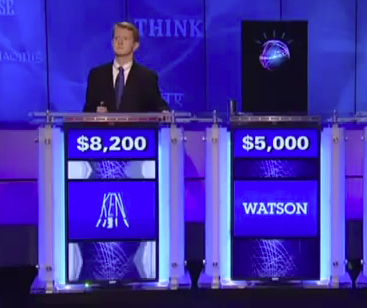 A scaled-down version of IBM’s Watson will be in Seattle starting this weekend for the SC11 supercomputer conference, giving attendees a chance to match wits with the machine that made a name for itself on television competing against Jeopardy! champs Ken Jennings and Brad Rutter last year.

As it happens, we had Jennings as a guest on the GeekWire radio show and podcast this past weekend, and we asked him what advice he’d give to anyone who decides to challenge Watson at the show.

For starters, Jennings explained, “It’s actually sort of a simulacrum of Watson. Watson doesn’t travel. Watson’s the size of an RV. To this day it’s the only Jeopardy contestant I’ve only been inside. So instead of actually bringing Watson to Seattle what they have Watson do is play Jeopardy games, and then they keep track of all of its responses and its timing, and it will duplicate what it did in the lab here against real-life competition — and probably mow them down.”

As for his advice? “I’ve gotta say, if you’re up against Watson, you’ve got to look for your chances, because it’s going to be merciless,” he said. “Search for the Daily Doubles at all costs. That’s what it’s going to be doing. Bet big given every opportunity. And hope you get nice short clues that Watson doesn’t have time to think about. That’s sort of the secret.”

We also asked Jennings what he learned about computers from the experience of competing against Watson.

“I guess the one thing it taught me is that we take for granted what we have in our heads,” he said. “IBM put 15 terabytes of RAM and millions of development dollars just up into beating two Jeopardy contestants. A few bucks worth of water and protein and salt and whatever else we carry around in our skulls. It sort of made me appreciate what we do everyday with cognition and language acquisition without even realizing it.”

Listen to the full show below. The conversation with Jennings begins at the 11:20 mark, starting with a discussion of his book, Maphead, which Amazon this week named to its list of Best Books of 2011.