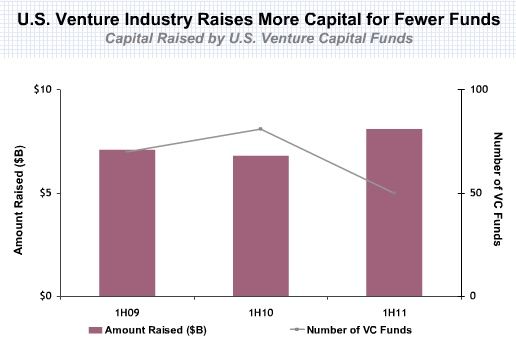 The strong are getting stronger and the weak are getting weaker. That’s one way to read a new report from Dow Jones, which showed that capital raised by U.S. venture firms increased by 20 percent during the first half of the year when compared to the same period last year. Meanwhile, the number of firms actually closing on venture funds declined by 38 percent to 50 funds.

“This year and next will be make-or-break for scores of venture capital firms in search of new funds,” said Scott Austin, editor of Dow Jones VentureWire, in a statement. “Limited partners have made it clear they’re in no mood to back underperforming firms, so the competition for capital will be fierce.”

Meanwhile, a separate survey from the National Venture Capital Association found that 37 U.S. venture funds raised $2.7 billion during the second quarter. That marked a 28 percent increase in dollar amounts, but a 23 percent decline in number of funds. It founds the venture capital fundraising stood at $10.2 billion across 76 funds for the first half of the year.

“The fact that the number of firms raising money successfully remains at such low levels
confirms an ongoing contraction of the venture capital industry, which will serve well those
funds that can obtain commitments – but that group is becoming more and more narrow,”
said Mark Heesen, president of the NVCA.

The NVCA noted that the 37 funds raising capital during the second quarter marked the lowest number since 1995.