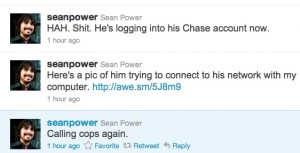 I got hooked tonight on an amazing Twitter drama, watching in real time as Sean Power live Tweeted about his attempts to recover his stolen laptop from a guy in a bar in New York City. Using software called Prey, Power was able to track the whereabouts of the stolen laptop, even capturing photos of the person using his machine.

It’s been fascinating to watch the drama play out — even more so because I just returned from the MIT Northwest Startup Demo event where the top award went to a company called ActiveTrak whose GadgetTrak software works like Prey.

Obviously — in this mobile device-centric world — there’s a real need to keep track of your gadgets if they are lost or stolen.

ActiveTrak CEO Ken Westin certainly thinks so, noting in his award-winning pitch tonight that the software has been used to recover all sorts of devices and even break up an organized crime ring in Oregon.

“We are not just a technology company, I think we are super heroes,” Westin said during his pitch.

The technology works with both mobile phones and laptops, with Westin saying that they have a 90 percent recovery rate of stolen laptops.

“Even on a laptop that doesn’t have GPS, we can actually get location of that device within 10 to 20 meters so we don’t need GPS,” said Westin, adding that the GadgetTrak software is being embedded in a number of devices.

Statistically, Westin said that burglary is typically the hardest crime for police to solve because of the lack of evidence.

“We provide them with the evidence. And now the police love us,” said Westin. “And once they see the evidence we provide — it doesn’t get better than a photo and a location of the suspect.”

ActiveTrak, which raised some cash last year, has about 150,000 paying customers.  The Portland startup just landed a deal with a South African carrier which plans to embed the ActiveTrak technology on every device they sell, with Westin saying the deal could lead to about three million units.

Westin said that’s a possibility, as long as the “price is right.”

“We are a company of engineers, so we can actually do a lot of custom work,” he said. “So, let’s say a car manufacturer came to us and they wanted a solution like this, we can work with them to find a way to embed it.”

And how did that laptop drama play out tonight? Well, I won’t spoil it for you, but turns out there’s a happy ending.