Everyone loves a good rivalry. And in online real estate, there’s nothing better than San Francisco-based Trulia versus Seattle-based Zillow.com. I’ve followed the back-and-forth fireworks between the two heavily-funded companies since they were founded. Now, with both Trulia and Zillow expanding their operations and positioning for IPOs, I decided to check in with Trulia co-founder and CEO Pete Flint to chat about the company’s IPO plans, traffic growth and, of course, the heated competition with Zillow.

A 36-year-old University of Oxford grad, Flint still likes to think of Trulia as a scrappy startup even though the profitable company has grown to about 250 employees. Backed with $33 million from Accel Partners and Sequoia Capital, Trulia is currently on a hiring binge, with staffing more than doubling in the past 12 months and a new Denver sales facility expected to top 100 employees by the end of this year. Here are excerpts from our conversation:

Zillow said Tuesday that it is expanding its office space in downtown Seattle by 38 percent. What do you make of that? “In comparison with our own growth, it is not that newsworthy, quite frankly. From our perspective, we’ve certainly doubled headcount in the last 12 months and I think we have expanded space even more than that.”

Can you explain the rivalry with Zillow? “We both started at a similar time, and both have silly names. So, we are quite similar companies in some respects. But at the same time, there’s a huge number of differences between the way we think about the business and the way we are growing. We started as four guys in a student library, and they started with 150 employees and an army of vice presidents. So, we are quite different in how we think about business.”

How about the differences on the operations side? “Our audience is more transactional and the community is much bigger, and probably most importantly the engagement on our site in terms of page views as measured by comScore (and) Hitwise is significantly larger than they are. They are quite different businesses once you scratch the surface.”

Zillow is bigger in terms of unique visitors at 16.8 million last month, no? “You can slice and dice the data anyway, and I think certainly you have to take some of these metrics with a grain of salt. If you look at Hitwise and comScore, they publish page views and you know page views, at the end of the day is really what matters. It is not someone looking at some foreclosed celebrity’s property, it is individuals looking at properties and that is really the monetizable unit.”

So, Zillow has more unique visitors, but people spend more time on Trulia and view more pages. Is that fair? “That’s definitely fair, and the snapshot view today is very accurate, and obviously we are growing faster on the top level in terms of visits and uniques, so it is really just a question of time before we overtake them.”

[Editor’s note: Amy Bohutinsky of Zillow responds to Flint’s remarks: “The reason we report number of people who visit (UU’s) and not pageviews is because we want to optimize the consumer experience on our site to be fewer clicks for people to get to the information they want. Thus, we want to have fewer pageviews.”]

Trulia was perceived as the underdog in this industry. Do you look at yourself that way? “We are certainly bigger than Zillow on a lot of these important metrics. We don’t really think of ourselves as the underdog so to speak, but I would say that it is still incredibly early in the evolution of real estate and I think we are very much an agile, focused, scrappy startup, so the DNA that we infused in the beginning is absolutely continuing today. And we continue to augment that with super great talent, so we brought on a Y Combinator team a few months back when we acquired a group called Movity. We are still very much a scrappy culture, and a hacker culture.”

Could we see more acquisitions? “Potentially…. At this point, we are in a position to think about inorganic growth. But at the same time, we’ve looked at dozens of potential deals, and only pulled the trigger on one. We are very, very selective about how we think about these. But, absolutely, you could see some more acquisitions in the future.” 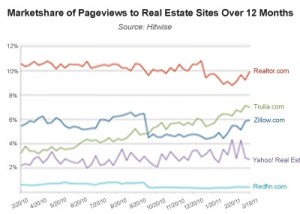 Both you and Zillow have chatted about IPO plans in the future. Is it important for you to get out first? “There are a lot of S-1s flying around out there, and this is a fantastic time to both building and investing in technology companies. But we don’t have a great sense of urgency around being a publicly-traded company. That’s not a particular milestone that we are focused on. And we have no capital needs right now. We are really delighted with our business, and we want to avoid to many distractions. So, will we go public? I very much expect so. Is there a timeline for that? Not yet.”

What is the big difference between you and Zillow? “There are many, many differences in terms of community engagement — we have a much larger community than they do. And the type of users that we have are much more transactionally focused than they are checking out home values.”

On the evolution of the online real estate business: “Now, you are seeing a lot of companies either exiting the business, like Google for instance, or you are seeing this audience consolidation among the leading sites. It is quite staggering when you look at some of these third-party tracking services how much the audiences are collapsing into, realistically, a few sites at the top. And that’s just something that has really happened in the last six months.”

Is there enough room for both you and Zillow? “Oh, for sure. We are already profitable, and we are really early on in our evolution. I think there is a huge amount of room in the category for multiple players, and if you look at any other vertical category — and we spend a lot of time studying industries like automotive, recruitment and travel — and each of those you see multiple billion dollar businesses.”