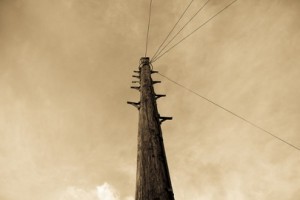 Guest Commentary: Lately I have had a recurring theme running through my head – “didn’t I see that startup idea before, only with a different name?  Aren’t there more than a few startups doing this same  little sharing thing? ”

I believe we are witnessing another “bubblish” period of time, with valuations of young startups skyrocketing and investment money flowing like wine from Napa Valley.  When money starts flying from every which pocket, so do the various copycats and so-called “Groupons for X industry” and “Airbnb for Y category” startups.  Ironically, creative innovation declines as similar business ideas get most of the available investment funding; I am not sure this is the best thing for the future of our economy.

Twitter co-founder Biz Stone recently commented, “Everybody said ‘Twitter’s useless.’ To which my co-founder Evan Williams said, ‘Well so’s Ice Cream, you want us to ban Ice Cream and all joy?’ We said, ‘Screw that. We’ll just keep working on it.’”

This ice cream statement is referring to some people thinking Twitter and other social sharing applications are just petty fun but don’t serve much purpose and are not very important to the development of our economy.  Others believe the future lies in developing new technologies around people and infusing social in everything we do.  So who is right?

Well, let me go on record saying I believe the application of social technology is indeed impacting our world and will continue to transform our society.  Yet, I will add a caveat to Stone’s point of view – ice cream is great, but utilities make the world go around.  Ironies aside, as Twitter becomes a utility to web users around the world, it ends up solving a problem we didn’t know we had, which happened to be discovering people and distributing information.  But how many social companies are actually created with a strong economic value proposition in mind?  I think the point is very clear – when evaluating business and startup ideas, entrepreneurs and investors would be wise to focus their attention on things that solve a very strong need and plug into society’s daily function if they want to increase their odds of success.

Take a look at the following list below and observe what they all have in common:

All those industries and the associated companies have one major thing in common – they are public utilities.  Being a public utility implies they serve a very obvious consumer need and  are frequently used products and services (speaking generally from a consumer point of view).  As a business they should have no problem developing a customer base, since their product is a need all consumers inherently have. 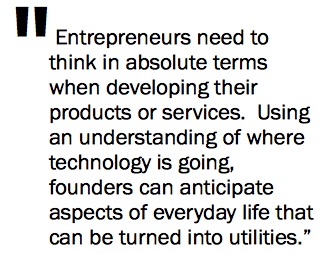 I suggest entrepreneurs think in absolute terms when developing their products or services.  Using an understanding of where technology is going, founders can anticipate aspects of everyday life that can be turned into utilities.  Here are a few things to consider:

Below are just a few examples of entrepreneurs viewing business as a utility.  Not an exhaustive list by any means, but they can serve as examples of clever business strategy and positioning.

Steel was foundational utility as our country expanded from a small “startup” into the economic powerhouse of the 20th century.  Due to the expansion of the steel industry, railways, buildings, cars and other major industries advanced.  From wikipedia:

The Bethlehem Steel Corporation ascended to great prominence in American industry, installing the revolutionary grey rolling mill and producing the first wide-flange structural shapes to be made in America. These shapes were largely responsible for ushering in the age of the skyscraper and establishing Bethlehem Steel as the leading supplier of steel to the construction industry.

Electricity, a la Thomas Edison, brought light to our night as well as power to our life.  Imagine a world without electricity… it is almost impossible to live in the 21st Century (at least in the developed world) without this incredible utility.  Think about all the other multi-billion dollar industries that have been born and brought forth because electricity became widespread technology everyone could use.

Although Henry Ford did not invent the automobile, he brought it (and mass manufacturing) to the general population.  With the introduction of the affordable car, consumers were able to travel more than a couple miles to spend their hard-earned money, a transforming effect on the young US economy.  Commercial malls, retail centers, Supermarkets and many other industries were born from the advent of the automobile.  From the book American Entrepreneur:

Autos fundamentally changed transportation from a collective undertaking, whether in boats or railcars, to a principally individual experience.  Cars represented independence, not only freeing people from the confines of the city but from restrictions imposed by a particular geographic region.

Bill Gates had a vision – a computer on every desk!  Unofficially, he has achieved his vision and then some.  Shouldn’t it now be referred to as ‘a computer in every hand/pocket’?  But, who is keeping score …  Gates and Microsoft built the software found in almost all computers available, bringing to life the PC  revolution and birthing the connected world we live in today.  Productivity of private, public as well as Personal lives has greatly increased because of the software industry Gates created.

As web-connected devices continue to drive our daily activities, no one company has a better position to lead the charge in our new world as does Facebook.  Mark Zuckerberg, at a ripe young age of 19, saw we would interact with devices, the web and people around the world in a whole new way.  In creating and growing Facebook, he established a platform users now consider a daily communications tool.  What can be built off it still mostly remains a mystery, but his vision of a utility is quite clear.

As a brieft list, these visionary individuals are amongst many others who transformed our world through groundbreaking businesses.  Importantly, all of them viewed their concepts through a utilitarian eye, observing where human life currently had a problem and how their company could offer a solution.  Find a need and fill it.  Serve a strong purpose in consumers’ everyday life.  Have a vision of a wide-spread platform, or a unique position where a multitude of new industries can be spawned from your one idea.  I believe that is the best position to start with when evaluating a new business venture.

Nick Hughes is an entrepreneur who lives in Seattle. He blogs at So Entrepreneurial, where a version of this post first appeared. Follow him on Twitter @jnickhughes.