Mark Suster is a bit of an oddity in the venture capital business — a straight-talking, no-nonsense former entrepreneur who happens to run one of the top performing VC firms in the country from L.A. So, when Suster rolled into town this week — hosting a dinner for entrepreneurs and keynoting tonight’s Seattle 2.0 Awards — I wanted to get to know him better. And here’s my conclusion: Seattle’s venture capital community could use a Mark Suster.

Suster, who joined GRP Partners in 2007 after selling his company, Koral, to Salesforce.com, is widely respected in the entrepreneurial community for demystifying the venture capital process. I chatted with the entrepreneur-turned-VC to get his sense on everything from the Seattle startup scene to the benefits of blogging to how he’s trying to get “wantrapreneurs” off the sidelines.

What are you impressions of the Seattle tech community? “I definitely talk to a lot of young, bright entrepreneurs who are building companies and they want to be in Seattle, which is great. They have a reason to want to stay, rather than move to the Bay Area. Having the existence of what I call ‘patron’ companies like Amazon or Microsoft or even Starbucks or Costco is awesome. I was a little bit disappointed to hear that there are less neurons firing between the startups and the patron companies. But I think Seattle has so much potential.”

Any roadblocks that you see? “It faces a challenge that we see in many regions of the country, which is a lack of angel money to get companies off the ground. And a lack of enough venture capital to get companies to the next stage. So, even Seattle companies start making the trek down to Sand Hill Road, and the minute they do that they are also getting their ears bended that they should relocate to the Bay Area.”

Are you spending time in Seattle this week because you think there’s an opportunity to invest here? “Without a doubt.”

Why is that? “Our last fund was the top performing fund in the country — literally number one. And when you look at where we made money, our biggest returns two came from New York, two came from Chicago, one came from Baltimore, one came from Arizona, one is from Las Vegas, two are in Southern California and two are in Northern California. So, our investment philosophy is: We believe we can make outstanding returns investing in the major regions of the country, and we believe that Seattle has all of the right ingredients for success.”

There seems to be an opportunity for a VC or a super angel in Seattle to step up and become more of the public face for the region’s tech community. You’ve taken on that role in L.A. Why did you do that, and does it lead to better deal flow and make you a better investor? “Number one, simply and honestly, I just started because I saw Brad Feld do it, and as an entrepreneur I always wanted to work with Brad because I thought what a great guy, he puts all of this information out there. And he seems very responsive and engaged. I used to do that when I was an entrepreneur, so why wouldn’t I do that now that I am a VC. So, I just kind of started. It wasn’t some master plan.”

Does it help you being so public on your blog and Twitter? “The reality is, is that it has resonated with entrepreneurs. And as a result my deal flow is kind of off the charts right now. It has also been a great vehicle to get to know people. I went to see Microsoft yesterday because one of the executives had read a blog post of mine, so we traded Twitter messages and I said: ‘Hey, let me come and see you.’ I’ve met senior people from Google and Facebook and Apple and Proctor & Gamble and digital media agencies the same way. What social media gives you is share of mind. If you have been a VC for 30 years, you have 30 years of relationships. That’s how you get access to share of mind. I’ve been in this industry four years, and so the way I get access to share of mind is being public and putting my thoughts out in public. It is also a large part of how I learn. If I am going to try to understand … mobile ad optimization 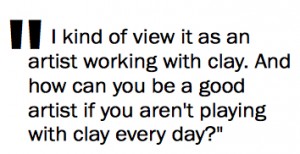 or social media or analytics or conversion engines or any of these things. I kind of view it as an artist working with clay. And how can you be a good artist if you aren’t playing with clay every day.”

On why he’s trying to get entrepreneurs off the sidelines: “I think there are one hell of a lot of people who are what I call ‘wantrapreneurs’ — meaning they want to do it but they just never get started. It is something I am going to speak a little bit about (tonight). The single biggest thing to get started is exactly that. It is the start. And I think 98 percent of the funnel gets weeded out because people think they don’t have the perfect idea, so they never try. My mission is to convince more people who have the belief that they want to try, to at least try. It is definitely not for everybody. But I think the earlier in life you try, the less encumbered you are by mortgages or debt or family or other obligations. We all know now that there is a pretty safe landing if you try and don’t succeed. People value that. They respect that.”

On thinking big: “There is a lot of incrementalism in entrepreneurship today. They are reading about the latest trend in the tech press, and they are thinking: ‘What if we could launch something and get Google or Microsoft or Yahoo to buy us?’ And that kind of incrementalism doesn’t usually produce that interesting of things. So, the flippant way I said it is: Does the world really need another fucking social media check-in at your restaurant tool? I mean, I like the ones we have, and I play with them, but do we need 1o more, really? The world needs to solve and the country needs to solve its immigration problems, its education problems. We need to solve health care and health information services problems. We need to solve the debt crisis. We need to figure out how to take our big industries and make them more effective … and get that engine working better…. That’s what I think about. Who has big ideas that really want to change the way the world works? And, in all honesty, that takes 10 years…. You talk to real entrepreneurs who have made a difference and they made the difference over 10, 15, 20 years — not two.”

What do you make of the whole ‘lean startup’ concept? “There is a middle ground. I always say: Focus on base camp, not the summit…. I think most businesses, not all, need to start lean. And you need to figure out if there is product-market fit. But, when you suddenly believe in your belly that you are on to something, you better go fat…. There’s no magic formula to tell you that you’ve crossed that threshold you and need to go big. It is the fire in your belly, and the belief that you are on to something really big. But I sure as heck think most companies ought to keep their options on the table.”