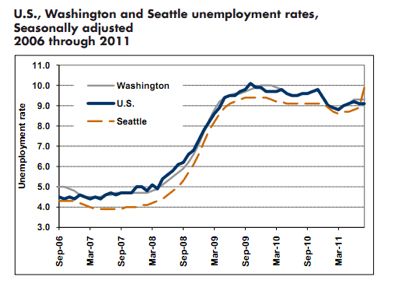 Washington state continues to add jobs, including more than 1,800 in the information category where a number of technology jobs are classified. But the pesky unemployment rate still isn’t budging much, stuck at 9.3 percent for the month of August. That compares to 9.4 percent for the same period last year, and essentially even with the month of July, according to a report out today from the state.

Manufacturing, including aerospace, saw the biggest surge in job creation for the month with 3,500 positions added. That was followed by education and health services (2,000 jobs) and information (1,800 jobs).

“How many ways can you say slow, steady progress?” said Dave Wallace, the acting chief economist for Employment Security. “At some point, there will be a tipping point where the constant job growth starts eroding the unemployment rate.”

That point hasn’t quite hit, even though 46,600 jobs have been added in the state this year and despite the insanity around hiring in the tech industry. Just this week, a number of Seattle startup companies banded together to co-host the Get A Real Job Fair in order to attract talented developers, engineers and designers.

“Unemployment for engineers is extremely low in the United States,” said developer and startup veteran Nat Brown who delivered the keynote address.

But — even though the tech industry is firing on all cylinders — some remain worried.

Greg Gottesman, a venture capitalist at Madrona Venture Group in Seattle, said at a luncheon last month that the larger economic forces could hurt the tech industry.

“At some point, all of these things that are happening outside of the tech world will come and bite us, and it feels like there is a bear outside the log cabin and it is rustling around and you are waiting for it to rear its ugly head,” he said.