One of the big problems with daily deal sites like Groupon and Living Social is that the offers tend to attract customers at peak business times, causing havoc for small merchants. A new Seattle area upstart by the name of Pirq believes it has solved that nagging issue with a mobile application that allows restaurants to tailor deals in real-time for specific parts of the day. For example, a sub shop could promote discounts between 4 p.m. and 6 p.m. on Tuesday afternoon.

In that regard, Pirq CEO James Sun said that the offering is similar to the dynamic pricing provided by hotels and airlines.

“The number one complaint that vendors have when they do a daily deal is that all of the redemptions are happening on their peak hours,” says Sun. “We are bringing a yield management piece. And I’ll tell you, we are literally out there competing against Groupon and Living Social and winning those deals.”

A four-month-old joint venture between GeoPage and Passport Unlimited, Pirq is taking the covers off the service for the first time today. The 28-person Kirkland company has already signed up more than 100 Seattle area restaurants, with the mobile app set to debut next month.

Best known for his appearance on Donald Trump’s reality show “The Apprentice,” Sun says that the daily deal model is fundamentally flawed. He calls what Pirq is doing “deal 2.0.”

Sun stumbled upon the idea after a friend bought a daily deal discount to a local spa. The business was so slammed with other people redeeming offers, that Sun’s friend couldn’t make a reservation and the deal ultimately expired. 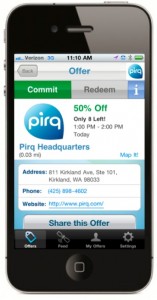 That caused Sun to think that there had to be a better way. At Pirq, he said that consumers will be able to redeem deals in real-time. And unlike the major daily deal sites, which offer say $30 worth of services for $15, Pirq plans to give customers discounts on the entire bill.

The company — which has signed minimum six month contracts with restaurants like 13 Coins, Cupcake Royale and Red Mango — plans to make money by taking a $2 to $6 fee on each person who dines at the restaurant.

Pirq’s service works in conjunction with Microsoft Tag to authenticate and track the coupons, with the company planning to eventually integrate into the restaurant’s point-of-sale system. It also allows customers to opt-in so that they get notified of deals as they pass nearby establishments.

Small businesses have grown frustrated with daily deal promotions, with a recent study by Rice University discovering that 42 percent of restaurants lost money on Groupon deals.

With Pirq, Sun is trying to reverse that trend.

“On every single deal, the restaurant is profitable,” he said. “We figured out exactly how much they need to make in order to give us our small cut, and it is so much better than the daily deal stuff which is 50 percent of the deal side. That kills their margin.”

Selling to restaurants is not an easy task, but that’s where Passport Unlimited’s experience in promotional dining offerings helps out. Passport Unlimited CEO Roger Blier serves as chairman of Pirq, while other executives from the company are involved in sales, marketing and operations.

But for those who watched Sun on “The Apprentice,” you already know that he doesn’t mind a little competition.

The 34-year-old entrepreneur previously founded Zoodango, a startup that attempted to serve as a matchmaking service between business professionals at local events. Like Pirq, Zoodango had a location-based element to the business. But the idea never took off.

“Five years ago, Apple didn’t even allow geo-coordinated type apps,” said Sun, adding that they were a “little to early.”