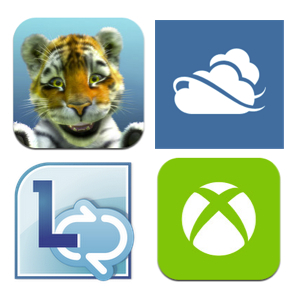 Who says Microsoft doesn’t ship products quickly enough? It has actually been tough keeping up with the company lately … at least when it comes to mobile apps, not only for its own Windows Phone but also for Apple’s iPhone and iPad, and even some for Android.

Lync: The app for Microsoft’s unified communications service for businesses went live on Windows Phone this week, with features including instant messaging and audio conferencing. The Android version is also available now, with versions for iPhone and iPad awaiting release in the Apple App Store.

Xbox Companion for Windows Phone: Microsoft’s updated Xbox Live app for Windows Phone includes the ability to search for TV shows, music and games, and use the phone to launch the content on the Xbox 360 console.

My Xbox Live  for iOS: The company also released an Xbox Live app for iPhone and iPad with more basic functionality, similar to the Xbox Live capabilities that Microsoft came out with for the original Windows Phone 7.

Microsoft Tag: The company updated its Microsoft Tag reader apps for iPhone, Android, Windows Phone and other mobile platforms with the ability to scan QR codes and read NFC signals.

OneNote: Microsoft’s note-taking software had already been available for iPhone, but the company this week updated the iOS app to include a version designed for the iPad’s larger screen.

Halo Waypoint: The “Halo: Reach” companion app, already available for Windows Phone, was released for iPhone and iPad over the weekend.

Kinectimals: This is another Xbox 360 companion app for iOS, allowing players to interact with their virtual pets and unlock five new Kinectimals cubs on their game console.

Update, Friday morning: There’s even more. I overlooked HealthVault, the Microsoft personal health-care records repository, which released its own Windows Phone app this week. (Thanks to Emily for pointing this out on Twitter.)