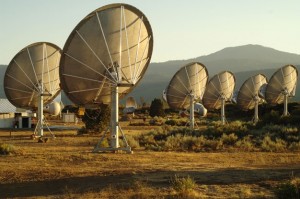 The search for alien life may be back on — at least in the short-term. A group established to raise cash to support the Allen Telescope Array — which shut down in April because of budgetary woes — says it has met its initial $200,000 financing goal. That’s enough to at least get the array operating again, with SETIstars saying that the search has become even more important.

“We are discovering more Earth-like planets every day, so now is more critical than ever to look for extraterrestrial life,” the group says. “A contribution from you, today, will fund telescope scans for signs of intelligence beyond our solar system. Please donate and help us find intelligent life out there.”

According to the Web site, more than 2,200 people — including actor Jodie Foster, astronaut Bill Anders and science fiction writer Larry Niven — donated to the project.

In 2001, Microsoft co-founder Paul Allen agreed to bankroll the initial construction of the radio telescope array, investing tens of millions into the project through his family foundation. Former Microsoft Chief Technology Officer Nathan Myhrvold also is a supporter of the organization, which completed the first phase of the project in 2007 with 42 antennas.

Allen actually addressed the promise of the alien communication system with GeekWire’s Todd Bishop earlier this year during an interview at Town Hall in Seattle.

Previously on GeekWire: SETI off the hook: What if we miss the call from the aliens?