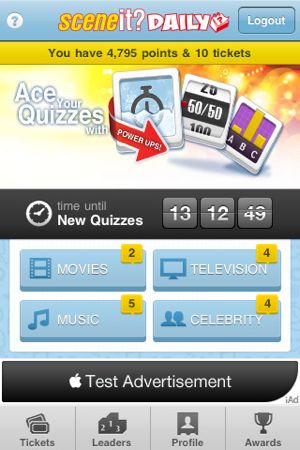 The “Scene It?” game franchise is getting broader and more timely today with a new trivia quiz game that works as an online service across iPhone, Android, Facebook and web.

Seattle-based Screenlife’s “Scene It? Daily” will offer daily pop culture quizzes in movies, TV, music and celebrity categories. That’s a departure from the company’s traditional practice of focusing on specific movie niches. The new game offers a combined leaderboard and uses a unified login, letting people start playing on one device, for example, and finish on another.

The game itself is free but it uses an in-game purchasing model, letting gamers buy tickets that they can spend for “power ups” that provide help with questions, such as extending the amount of time to answer, or narrowing down the choices from one to four. (A base level of 25 tickets costs $1, and each assist costs a ticket.)

The game also includes advertising, and sponsors will offer players the opportunity for free tickets.

Screenlife, which launched the original “Scene It?” as a DVD game in 2002, says it will make “Scene It? Daily” more timely by basing some questions on current events, such as which movie ended the weekend atop the box office, or who won the previous night’s awards show.