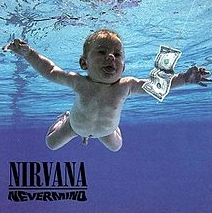 It’s the 20th anniversary of Nirvana’s landmark Nevermind release, and the world is taking a moment to reflect.

“The album would go on to usher in rock’s great renaissance, cause a seismic shift in popular culture, bring the underground to the mainstream and make unwilling stars out of three rather scruffy guys from the Pacific Northwest,” writes MTV’s James Montgomery in one of many tributes to the iconic album.

But there’s one place where Nevermind isn’t getting its due.

Leading up to the anniversary, Seattle grunge fans were lobbying Google to dedicate one of its trademark Google Doodles to the occasion.

As the “Grunge Scene” Twitter account put it so eloquently this past week… “Hey @google Nirvana’s Nevermind 20th anniversary is Saturday. Don’t screw this up, let’s get the #Nevermind20GoogleDoodle.”

And so this is what we’ve got on the Google home page this weekend.

We don’t know if Google actually considered a Nirvana tribute, but it’s probably safe to say that the idea of working with the late Muppet master’s family is probably a little more appealing than the prospect of dealing with Kurt Cobain’s survivors on such a project.