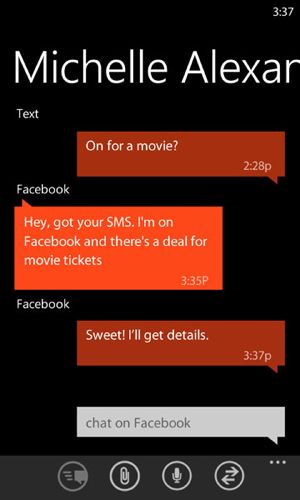 Since the beginning, Microsoft’s strategy with Windows Phone has been to create a unified experience across the device — drawing information and sources from a variety of sources into centralized hubs to keep users from getting lost in the “silos” of individual apps.

The company continued that push this morning as it unveiled new features slated for the next major version of Windows Phone, known for now by the “Mango” code name. The question is whether they will be enough to capture the attention and build the momentum that the company needs right now in the pivotal mobile market.

Microsoft is touting more than 500 new features in the Mango release, but here are a few examples …

Threads: A new messaging feature allows users to switch a conversation among Facebook chat, Windows Live Messenger and SMS text message. For example, if the friend you’re chatting with logs off of Facebook, you can continue the conversation via text message.

Quick Cards and Local Scout: Here’s where the phone starts to seem more and more like an app unto itself. Quick Cards are summaries of information for things like movies, products or events, with links to related apps. Local Scout is a city guide or restaurants, shopping and activities, using information scraped from the web.

App Connect: Search results on Windows Phone offer the option for deep links into apps. For example, on the webcast of Microsoft’s press event this morning, a search for a particular book using Bing in Windows Phone offered the option to connect with related apps, including Amazon Kindle. When clicked, that link took the user to the page in the Kindle app for that particular book.

Andy Lees, Microsoft’s mobile chief, offered this analogy during the event: “Think of your applications as musical instruments. With Mango they become an orchestra that finally has a conductor.”

Some of the other notable features include the ability to communicate with groups of contacts, the option to choose which email accounts are grouped in a unified inbox, and better voice support for hands-free texting. Microsoft is also promising much faster browsing by bringing Internet Explorer 9 to the phone. See the company’s official rundown for more.

Give Microsoft credit for being consistent with its strategy. And many of the new features do look interesting. But it feels like Microsoft needed something bigger — something like that Kinect integration that it showed off earlier this year — in addition to these types of incremental improvements.

It’s clear that Microsoft is betting heavily on its partnership with mobile giant Nokia to build momentum in the long run. Lees told the press conference this morning that Nokia’s first Windows Phone devices will run the Mango version, and Microsoft already has Nokia devices running Windows Phone Mango in its labs.

In the meantime, the iPhone and Android are going strong, and Windows Phone devices were outpaced even by legacy Windows Mobile handsets in the first quarter.

More than 18,000 apps are available now in the Windows Phone Marketplace. In conjunction with today’s announcements, the company released the beta of the Mango developer tools, allowing app makers to take advantage of the new features.