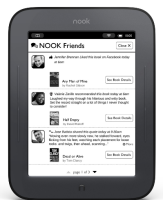 Barnes & Noble today introduced the latest version of the Nook. And like yesterday’s announcement by rival Kobo, Barnes & Noble’s new electronic reader features a 6-inch eInk touchscreen. But Barnes & Noble is promising even more, saying that the new gadget will be able to sustain battery life of two months on a single charge. (Three weeks with Wi-Fi on).

So, that makes us wonder: When will Amazon.com release a touchscreen Kindle with extra long battery life?

Barnes & Noble has always recognized the simplicity and ease that the element of touch brings to its NOOK product line, and the All-New NOOK is no exception. With a simple tap to the 6-inch touchscreen, it’s intuitive and easy to navigate, shop and read. Customers can look up words, highlight passages, adjust the font size and style or search by typing on the responsive on-screen keyboard that appears only when a customer needs it.

Interestingly, that’s similar to what Kobo had to say about its new eReader Touch device.