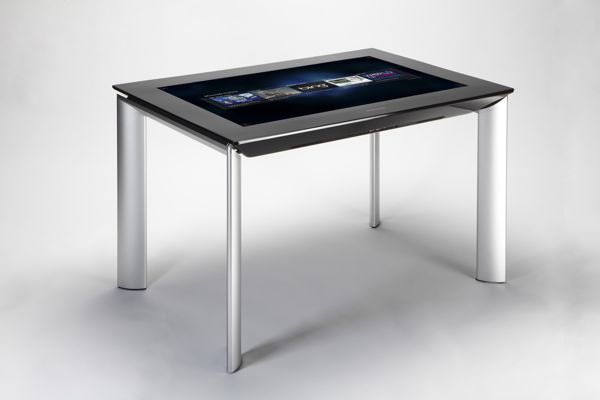 The new version of the Microsoft Surface tabletop computer made an unexpected appearance at the recent Paris Air Show, as Dassault Aviation showed a trio of Surface applications that work in conjunction with its Rafale military aircraft.

It’s an early glimpse of a new wave of applications on tap for the Surface 2.0. Microsoft this week is releasing a software development kit for the machines as part of its Worldwide Partner Conference in Los Angeles. The Surface 2.0, designed primarily for commercial and enterprise uses, is expected out later this year.

But no, the Surface isn’t actually going into the Dassault fighter jets. Microsoft’s Surface 2.0 (officially, the Samsung Sur40) is smaller than in the past — no longer sitting on a podium of cameras and sensors — but still too big for the cockpit.

The applications were all designed for use on the ground, in conjunction with marketing and operations for the jets. Here’s a description of the apps, via Dassault.

• Promotion of the Rafale Export: virtual tour of the aircraft, animated explanation of concepts, configurations and performances.
• Military Mission Planning: air patrol configuration, outline of the tactical situation and the mission in all-tactile mode based on cartographic data.
• Post-flight debriefing and diagnostics support for flight line crew and mechanics.

There’s also a glimpse of the apps in this video from the show. (Anyone want to help out with a French translation?)

Thanks to Isaac Alexander for the tip. Follow his aviation feed @jetcitystar.