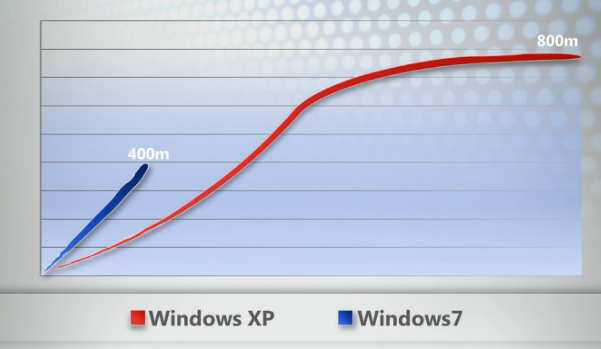 At its Worldwide Partner Conference in Los Angeles this morning, Microsoft updated its Windows 7 sales figures — saying that the current version of its operating system has sold 400 million licenses, significantly outpacing Windows XP’s growth over the same period of its life.

As we’ve noted in the past, the PC market itself has grown significantly larger in the ten years since Windows XP was launched, but even adjusting for that larger size, Windows 7 is doing better than its most successful predecessor.

Windows XP is still running on more than half of PCs worldwide, according to Net Applications, but it’s in decline as Windows 7 rises, now at more than 27 percent. Windows Vista, the ill-fated release that came between the two, has slipped to less than 10 percent, on its way to oblivion.

Microsoft is also talking about Windows 8 at the conference, with Microsoft CEO Steve Ballmer calling it “a true reimagining of Windows PCs and the dawning of Windows slates.” The company is looking to the new Windows release as a way of catching up to the iPad in slate-style devices.

Via the conference webcast, Microsoft executive Tami Reller is now giving a rundown of the announcements made thus far, but there doesn’t appear to be any major Windows 8 news emerging from the conference. Microsoft is expected to give more details at its Build conference for software and hardware developers in Anaheim, Calif., in September.