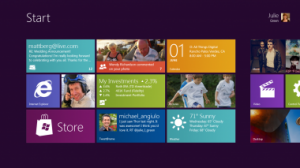 Microsoft is thinking about coming out with its own brand of tablet computer to better compete with the iPad, according to a report by DigiTimes out of Taiwan this morning, quoting anonymous “sources from the upstream supply chain.”

If it’s true, it would be a major break from tradition for the company, which has long stuck to providing the underlying operating system and other software for a variety of PC makers, not its own PC hardware.

The company, which last week unveiled plans for a new tablet-friendly version of Windows, would continue to work with other PC makers, as well, according to the reports. But the strategy of offerings its own branded device would compete with those partners, creating an awkward situation.

No comment from Microsoft this morning. Frank Shaw, the company’s VP of corporate communications, tweeted an hour ago, “nothing like starting the day with a hot steaming cup of speculation.”

There are precedents for the company offering its own brand of devices in the consumer market, including the Xbox and the Zune music player. But the Windows business is one of the primary engines driving the company, and it would be a surprise if Microsoft went this route.

(Via Seattle Times and Alley Insider)