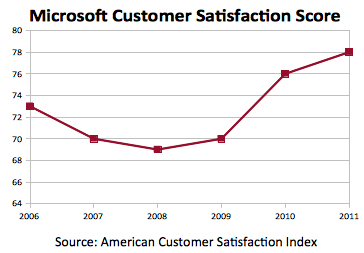 Have we finally witnessed the death of the Blue Screen of Death?

OK, so that’s still a bit of a reach, but new numbers this morning from the American Customer Satisfaction Index show satisfaction with Microsoft software reaching a new peak of 78 on the 100-point ASCI index. That’s up from a trough of 69 in 2008.

It’s the third straight year of gains for Microsoft in the index and a sign that the company is continuing to recover from the poorly received Windows Vista as computer users make the upgrade to Windows 7. Vista debuted in January 2007 and was succeeded by Windows 7 in October 2009.

However, satisfaction among existing customers does not necessarily translate into booming sales. Microsoft Office revenue is up, but sales in Microsoft’s Windows division fell 4 percent last quarter, as Windows PC sales fell victim to the rise of the iPad, a trend particularly evident among netbooks and other low-priced portable machines.

“Customers are more satisfied with Microsoft software, but, for now, the company is selling less of it,” say ASCI researchers in a commentary accompanying the data.

Apple is categorized in the index as a personal computer maker (not as a software company) and it traditionally sits atop those rankings — last year reaching a new peak of 86 in the ASCI index. (The PC numbers have not yet been updated this year in the public ASCI scores.

Other notable trends in the latest ASCI numbers:

The ASCI index was started by the University of Michigan’s Ross School of Business. More available data here.