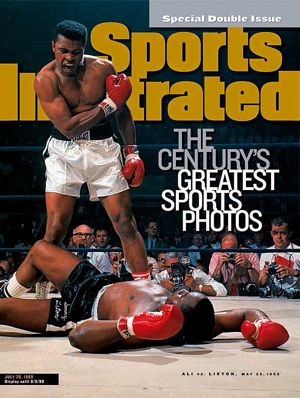 An extensive look at Microsoft Bing’s attempt to challenge Google, published by the New York Times today, will get lots of attention for the irresistible opening anecdote about Bing general manager Mike Nichols drawing inspiration from the famous picture of one-time underdog Muhammad Ali standing triumphant over Sonny Liston.

But the real insight from the piece comes from a passage on the third page that explains, more clearly than I’ve seen it explained before, what Microsoft is actually attempting to do in search.

The passage starts with the description of a Microsoft Bing prototype called “DeskBar” — but DeskBar itself isn’t as important as the broader strategy it represents.

It is downloadable software for personal computers, and perhaps for smartphones and tablets. The DeskBar, in the early June prototype, sorts information by categories like people, documents and Web sites. It presents information in those categories in large on-screen icons, or tiles, and sorts data by what is most “recent, relevant and frequently used,” as one designer says.

The people feature, for example, sorts through communications including e-mail, Facebook and Twitter messages. The idea is to filter messages according to computed criteria — like those from your work colleagues, or from people you communicate with most often.

DeskBar is one of several experimental projects in the larger Bing strategy, Mr. MacDonald explains later. “You take a product category, you expand it and you own that expanded category,” he says. “We have a recipe.”

Translation: Microsoft is trying to make Bing part of the larger digital experience, not just the search experience. And that’s where it hopes to ultimately win.

For Microsoft to stand a chance, search has to become a much more pervasive, natural and intuitive part of everyday life. Typing words into a box needs to become the equivalent of turning on a black-and-white TV and fiddling with the knobs. Search needs to be something bigger and richer than that. Search might not even be the right word.

An early example of this approach is Microsoft’s plan to offer Bing-powered voice search as part of its Xbox Live system, allowing people to access content on their consoles using voice commands from the couch. Integration of Bing into Windows Phone is another.

The ’tiles’ in the NYT’s explanation of the DeskBar prototype clearly mesh with Microsoft’s Windows 8 plans (although antitrust precedents mean the company won’t be able to fall back on its old habit of bundling its underdog product with Windows, a la Internet Explorer vs. Netscape).

Bottom line, this is more evidence that Microsoft won’t be throwing in the towel on Bing — no matter how many billions it loses on the fight.