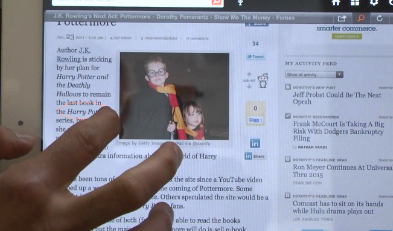 Microsoft today is releasing an update for its well-received Bing app for Apple’s iPad, with a new feature designed to streamline the process of conducting online searches on the touch-screen device.

The feature is called “Lasso.” Users will activate it by pressing an icon in the upper right of the app, then circle a phrase or word they want to search in the text. When they take their finger off the screen, the app will automatically conduct a Bing search for that text.

“From our research, we know that many searches are inspired by things people see on the web,” says Tony Chor, Bing group program manager, in a post this morning. “Today, it can be somewhat painful to search on a tablet when you’re engaged in reading something; just copying and pasting pieces of text from a webpage to a search box can take up to nine steps on the iPad. With Lasso you can circle and search in just two steps.”

Microsoft calls it searching without a search box. Also see the Bing post for a video demo.

The irony here is that a Microsoft division is touting an interesting new feature on Apple’s iPad. Apart from highlighting one of the more cumbersome aspects of the Apple device, it underscores just how much Microsoft and its Windows hardware partners need to capture the attention of the consumer market, and catch up to Apple, with new tablets of their own.

Microsoft’s Windows 8 will introduce a new tablet-friendly interface designed to help the Redmond company get back in the game. The new operating system is expected out sometime next year, and it would be a surprise if something similar to the Bing Lasso weren’t included in the experience.

The Bing 1.1 release for iPad will be available later today in the Apple App Store.