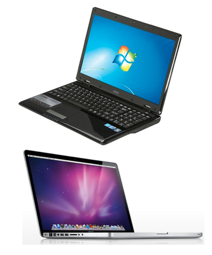 Apple is set to report earnings Tuesday afternoon, amid expectations of a blowout quarter. While much of the focus will be on iPads and iPhones, it’s becoming increasingly interesting to watch the company’s traditional Mac business — specifically Apple’s ability to defy the trends in the broader personal computer market by boosting Mac sales at a healthy clip.

The latest numbers from the IDC research firm show Apple’s Mac shipments rising 14.7 percent in the U.S. in the second quarter, making the company the No. 3 personal computer vendor in the country. Nos. 1 and 2, HP and Dell, saw their U.S. shipments decline by 0.6 percent and 10.2 percent, respectively.

It’s important to keep in mind that Apple is growing from a smaller base, compared with the overall Windows PC market, so it’s easier for the company to post larger percentage gains. Worldwide, Apple isn’t large enough to register among the top five PC vendors in the IDC rankings. Still, Apple is now ahead of Toshiba and Acer in the U.S. market.

The numbers show that the secret to Apple’s recent success isn’t just the company’s ability to expand into new areas, it’s also its ability to continue growing its traditional computer business. Macs are still a reliable engine for the company, even as new devices provide the fuel.

Microsoft reports earnings Thursday afternoon for its fourth quarter and fiscal year ended June 30. Analysts predict a record year for the Redmond company — almost $70 billion in revenues and a 23 percent increase in annual earnings per share.

The difference is that Microsoft has recently been needing to rely on products other than its Windows business to fuel its growth. Microsoft leans heavily on PC sales to drive Windows sales, because so many copies of the operating system come on new machines. As goes the PC market, so goes Windows. Economic uncertainty and alternative devices — including Apple’s iPad — are cutting into sales of traditional PCs.

In the previous quarter, the company’s Xbox and Office businesses stepped up to make up for slumping sales in the Windows & Windows Live Division, which reflected the decline in worldwide PC shipments at the time. The story is likely to be similar this week, given the relatively modest 2.6 percent growth reported for the worldwide PC market in the latest quarter.

On the positive side, sales of Windows 7 licenses have been outpacing previous versions of the operating system. Microsoft is also in the midst of redefining its Windows business, with a unified interface and a common application ecosystem across a broad range of devices. The critical moment will be the release of Windows 8, expected sometime next year, and the big question is whether the new approach can re-energize the Windows PC market, defined broadly.

The other question: Where Apple will stand by then in the rankings above?

Related: Too much tablet? Apple, Microsoft at risk of overdose