Startups, by their very nature, are built to move fast. But Zulily, the Seattle daily deal site that just scored $43 million in venture capital, takes the concept to an entirely new level having grown from four to 240 employees in 18 months. In fact, CEO Darrell Cavens and the rest of his team have a name for it: “Zulily time.”

In an extended interview with GeekWire, Cavens talked about his entrepreneurial philosophy, the company’s expansion plans and why he still gets every customer service email forwarded to his inbox.

Here’s more from our chat with the 38-year-old father of a five-year-old girl and three-year-old boy.

Zulily has flown under the radar since it was founded. Why?: “We’ve just been obsessive on focusing on the customer and member growth.”

Is the low profile because you don’t want to tip your hat to potential rivals? “I see entrepreneurs who lay out the full playbook, and I think you saw this with us at Blue Nile. By staying very focused and trying to be best in the world at what we are doing. We are not out looking to see our names in print necessarily, as much as we are trying to build a great business, and hopefully you see that as you walk around. I think we’ve got great employees, but I’ll tell you, it makes it a little harder from the recruiting side.”

What is the Zulily story? After all, most people may see you just as another daily deal site. “There are certainly many sites out there. What makes us special is that we are focused on a customer segment that is very passionate about their kids, and they are looking for great products. We feel like we can be the best in the world at 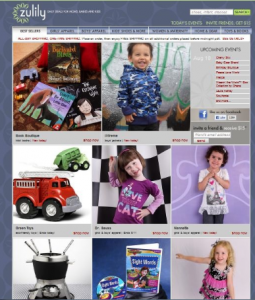 being the children’s retailer of choice for these moms…. If you look at the retail space for that market, at the low-end it has been commoditized by Babies R Us, Toys R Us, Walmart. But, even if you go up market even just a little bit, what we see is mass fragmentation going on where it is really the local boutique store in any given town that’s selling … in those mid to upper-end price points. So, there really just isn’t a great brand out there for moms to look to.”

On why Zulily is like a newspaper: “We are publishing a new version of the site at 6 a.m. everyday. So, 6 a.m. is coming and whether we are ready or not, we have deadlines and we have to release a new set of events. And we really try to curate that so we have diversity of product and diversity of offering across all the different categories we work in…. So, if you have a 2-year-old boy and I’ve got a 5-year-old girl, there’s something relevant to each of us in the email. And I think that’s why these moms are opening the email and visiting the site every day because there’s something new and exciting and relevant there. And, when you look at a lot of the daily deal sites, there’s a lot of the same going on. And we really strive to have unique special offers every day.”

What are your plans to expand into new categories beyond baby and kid’s products? “We see this as a great category and we are going to stay obsessively focused here, similar to what you saw us do at Blue Nile. We felt that we could be best in the world there…. (We) feel like we can be the best in the world at children’s retail…. We are going to stay squarely here. There is a massive market opportunity and our moms expect us to stay here.”

On what happens when daily deal sites lose their focus: “All of these daily deal sites, live and die by the email open rate. And, as I watch some of these broad-based players start to add everything in there, the relevancy and discoverability is not there anymore. If you are one of these big sites that was initially going after urban, younger women with fashion, and then you start to throw in maternity and travel and you start to throw in men’s, at some point the content becomes less relevant to you and you disengage…. We are not going to try to be everything to everybody.”

Could you expand into things like family-oriented travel? “Our members give us license because we are doing something new every day…. I think you will see us test some of those things over time, but I don’t think they will ever be in the core, though. You will see us find things that are relevant to mom and see if we can put that in there, but we are not going to chase everything.”

Do you see an opportunity in brick-and-mortar stores? “The short answer, right now, is no. The reason this business works is because we don’t have the expense of those stores…. And, because we are launching a new product every day and that discoverability, I don’t think in a store environment you can do that.”

What are you going to use the new cash for? “We haven’t put a lot of money into the business to this point, so really it is allowing us to continue rapid growth. The DNA of (Chairman) Mark (Vadon) and I we tend to believe in running fast — learning and testing. I think you will see us continue to move fast.”

On moving into the company’s new office: “It doesn’t feel like we’ve been here just four weeks. But that’s ‘Zulily time.’ This is our fourth office in 18 months. You could argue that I am either really bad at real estate planning or we have grown really fast.”

On why vendors like Zulily: “We try to represent their brand well. And they are only up on the site for 72 hours. And, as you know, (kids) grow through their clothes pretty quickly. So, if you buy something from us from a great brand that 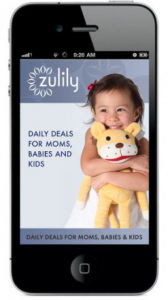 you love, and if your son grows out of it, you are going to have to go to a traditional channel to buy it because we are not going to have it on the site. So, it drives awareness. And, over time, it drives those people into stores…. We have vendors that we will crash their Web sites when we run their event because the (Zulily) members go out and search for it and they can’t handle the traffic. If you look at the brands we’ve run, you see that they are coming back.”

On the company’s new iPhone app: “We’ve seen great usage on mobile devices, and as you look at launching events at 6 a.m. on the West Coast, there are a lot of moms who wake up and check us out….. It is pretty straightforward, but we’ve had a lot of people asking for it.”

What’s the big challenge facing you right now? “It changes constantly. Mark (Vadon) put it well once when he (said) having a startup is a little bit like having a bunch of spinning plates on your fingers. Once in a while, one area gets a little wobbly, and you’ve got to get it going again. And then another area gets a little wobbly. With this kind of growth … hiring and people management and getting the culture right as we grow this fast is absolutely critical to me.”

On why he moves so fast: “The business moves very quickly. Again, that daily publishing model, you’ve got to have a mindset of fast and we have that throughout the business. The team internally talks a lot about Zulily time, where it moves twice as fast as anybody thinks it can. And that has been in the DNA since the beginning. How we started the business, that’s how it was, going from idea to launch in two and half to three months. And we’ve kept that pace and mindset.”

On the intricacies of building a daily deal site: “It is easy to start those businesses. It is hard to really to get it scale, and especially when you are fulfilling product. You’ve got to be able to do it well everyday. You have to have branded bags and packages. You’ve got to have things like packing slips and customer service.”

On the company’s growth and IPO plans: “We don’t want to build a nice little hobby business. We want to build a great retailer. There are some amazing retailers out of Seattle, and long-term there are bunch of different paths we could go. But this could absolutely be a phenomenal standalone business and that’s our vision of where it goes.”

On micromanaging customer service and the importance of staying ahead of the competition: “There really isn’t anyone directly in our wheelhouse, other than Totsy. We are staying so obsessively focused on the customer. When I was back at Starwave, we had ESPN.com, and we had a company out of Florida called Sportsline…. And we’d roll out features on ESPN, and then the Sportsline folks a couple weeks later would roll out that. Our vision there always was be the leader, focus on the customer, drive forward and do great things and you will drive the traffic and don’t be obsessed about the followers behind you. That’s the mindset we try to have here, and that’s partly why we’ve grown the way we have because we obsessively listen to members. To this point, I still get every customer service email that comes in CCed to me and it goes into a folder in my inbox, so when I am traveling I will spend time reading through them. It is starting to gobble up a little bit of storage space.”