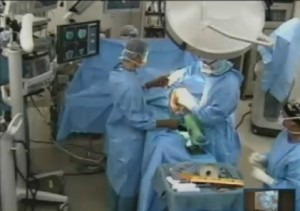 Doctors need reliable equipment in the operating room. But one piece of technology — albeit a minor one — failed early this morning as doctors at the Swedish Orthopedic Institute were prepping to broadcast one of the first live online knee replacement surgeries. The online broadcasting channel that the hospital had set up at Ustream unexpectedly went into maintenance mode.

Ugh. Haven’t we all been there before.

That created a mini crisis for Swedish, which has been attracting national attention for the online broadcast.

Doctors are accustomed to adjusting on the fly, calmly reacting to crises. And dealing with the technical glitch for the broadcast was no different. The tech gurus at the hospital scrapped the Ustream feed and switched over to Justin.TV.

The Justin.TV broadcast has been working much better, though there have been a few outages.

“We had a little technical difficulty and I apologize for that,” Dr. James Cutcher said at one point who is offering analysis during the procedure.

The knee surgery just started, and followers of the broadcast can ask questions via Twitter at #livekneesurgery. Let’s hope the doctors in the operating room don’t encounter their own Ustream-style outage.

It is not uncommon for doctors to record surgeries, but they are often taped for later viewing. A live broadcast — complete with Twitter question submissions — is unique. Orthopedic surgeon Sean Toomey admitted as much as the cameras focused on him this morning in the operating room.

He noted that a live broadcast on the Internet is “unusual.” But he assured viewers that the patient had given his consent for the broadcast, adding that at any time during the surgery they will cut off the live feed if it interferes with care.

Now, just sit back, grab your coffee and watch the action begin.

It’s pretty gory stuff, so if you are at all squeamish, please avert your eyes. But there are also a lot of high-tech elements, including ‘GPS-style’ trackers which help the surgeon pinpoint the exact positions of the bones in the knee.

There’s also been at least one Grey’s Anatomy joke.