The Kindle has transformed the way people read books. But there’s been at least one casualty of the e-reading revolution: What happens when you want authors to sign digital copies of your favorite books?

Seattle developer Evan Jacobs believes he’s devised a high-tech solution to that nagging problem. It is called KindleGraph. And, like the name suggests, it allows authors to post a digital signature — complete with personalized messages — direct to one’s Kindle. 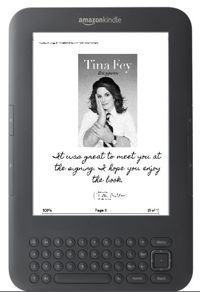 Jacobs built KindleGraph over a 48-hour period at a development hackathon sponsored by the Seattle electronic signature company DocuSign.

A 10-year-veteran of Amazon who left the company earlier this year, Jacobs came up with the idea after he wanted to get digital autographs from authors on his own Kindle. At this point, KindleGraph is pretty small, with Jacobs describing it as a “fun side-project.”

Just nine books are available for author signings at this time, including Brad Feld’s Do More Faster and Eric Ries’ The Lean Startup. Just a few dozen digital signatures have actually been signed.

Most of the authors in the line-up have written business or technology-oriented books, but Jacobs just scored Lindsay S. Nixon’s popular vegan cookbook The Happy Herbivore.

Here’s how it works: Readers make a request on KindleGraph, with author’s notified of the request via email. Authors sign the book with the electronic signature technology from DocuSign, with the autograph appearing as a separate document on the Kindle.

Readers can set up a separate folder to store all of their signatures, creating a specialized autograph book of sorts.

Jacobs said that the idea was well received at the hackathon in San Francisco where he won second prize in the innovation category.

But he’s not the only one chasing the idea. In April, The New York Times profiled a startup company called Autography which is doing much the same thing.

At this point, Jacobs is trying to recruit authors. He’d love to get high-profile authors like Tina Fey, The Oatmeal or Steven Johnson using the system.

One idea he’s considered is hosting virtual book signings where authors could create a video presentation promoting their books.

“Then, anyone who is watching can request a KindleGraph and they get it seconds later delivered straight to their Kindle,” said Jacobs. “It makes those author and fan connections much more available.”