On a recent summer afternoon, Seattle’s South Lake Union neighborhood is buzzing with activity. Amazon. com employees line up at a popular burrito truck to grab a quick bite, and at a nearby coffee shop entrepreneurs chat about their next move.

Given the energy, it is a bit hard to imagine that the neighborhood was once a forgotten corner of the city. But economist Paul Sommers saw it coming, writing in a report seven years ago that the neighborhood could generate 15,000 to 23,000 jobs by 2020. At the time, not many believed the projections.

I was one of them as was Josh Feit at Publicola, in part because the area was being discussed primarily as a cluster for a biotech industry which had yet to take root in the city. But fast forward to 2011, and a new report from Sommers and Michael Mann at Cyan Strategies indicates just how far the neighborhood has come.

In fact, South Lake Union has already attracted 13,647 jobs — well ahead of the 10,497 that were estimated in the original Sommers’ report. Even the biotech industry is ahead of pace — representing 4,462 jobs in the area.

But the big growth is coming in “office” jobs — which is more than 2,800 ahead of Sommers’ original estimates. Some of that growth obviously is tied to Amazon.com’s decision to move its corporate headquarters to the neighborhood. 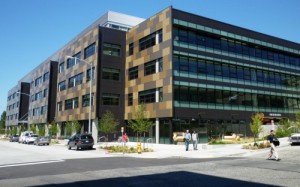 But, as Danny Westneat at The Seattle Times notes, the new report was conducted late last year before most of those Amazonians arrived. “So it’s possible that Sommer’s 2004 guess of 23,000 jobs is on the verge of coming true nearly nine years early. Despite the recession,” Westneat writes.

Other high-tech firms are setting up shop in the neighborhood, driven by the buzz. One new entrant is TechStars, the high-tech incubator which just accepted another batch of 10 startup companies. (The space has gotten so crowded that Big Door Media, which used to be located there, just moved to a first floor office space in the building).

In their columns, both Westneat and Feit conclude that the South Lake Union investment — driven largely by Microsoft co-founder Paul Allen and his Vulcan real estate arm — has paid off.