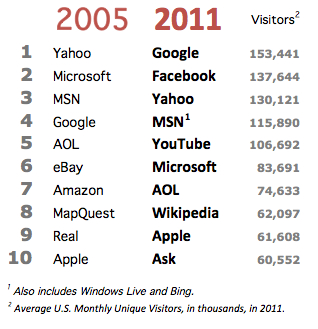 Nielsen has released its year-end list of the top 10 web brands, based on average monthly unique visitors, and there’s a bit of drama playing out at the top. Facebook’s meteoric rise has quickly made it No. 2 in U.S. audience, surpassing Yahoo and starting to come within reach of Google.

Apart from industry bragging rights, rankings like this say a lot about our online habits, in this case showing how social networks are rivaling search as our entry point to the online world.

Just for fun,the list inspired GeekWire to go back and find a similar Nielson Netratings list from 2005, to see how the rankings have changed (and stayed the same). It’s important to note that the rankings used different research methods, so our chart comparing the 2005 and 2011 lists isn’t statistically valid.

That said, it provides a rough snapshot of how much things have changed in a span of just six years. Google was at No. 4 back in 2005, behind Yahoo, Microsoft and MSN. And Facebook wasn’t even on the list. Having been founded just a year before, Facebook was still focused on colleges and wasn’t yet available for widespread public use at that point.

With that in mind, here’s the interesting question for 2012: Can Facebook claim the No. 1 spot?