We’re kicking off a new feature today, a GeekWire “Geek of the Week” honor for the Pacific Northwest technology community. We thought it was only appropriate to start with Erica McGillivray, president of GeekGirlCon, a Seattle-based nonprofit holding its first annual convention later this year. As you’ll see from her answers (and picture) below, Erica’s geek cred is very high.

Job, hobby and/or other geeky pursuit: I’m the President and Marketing Director for GeekGirlCon, a nonprofit startup which supports and celebrates geeky women who love everything from comic books and gaming to biology and robotics. We have events all throughout the year, but will have our first annual convention October 8 & 9, 2011 at the Seattle Center Northwest Rooms.

What makes you a geek? I’ve been a geek since I started watching Star Trek: the Next Generation when I was 3-years-old with my mom. Besides my involvement with GeekGirlCon, I work in e-commerce, currently for ExOfficio, where I’ve done everything from front-end coding and graphic design to SEO and social media. I’m a huge genre/cult TV fan from Lost Girl and True Blood to Mad Men and Doctor Who. I’m also a comic book nut, which along with TV I blog about, and besides the current comics I love (Secret Six, Osborn, Batgirl, Mouse Guard), I’ve been wading my way through 1940’s Wonder Woman.

Coolest thing about what you do: I love being able to show women that they’re not the only female geek in the world. Being able to connect geeky women with each other for support, networking, and friendship is the most amazing thing about being part of GeekGirlCon.

Geekiest thing you’ve ever done, built or worn (photos encouraged): Putting on a con for geeky women, of course. But personally, I cosplayed as Alice, the villain in Greg Rucka and J.H. Williams III’s Batwoman: Elegy comic book to Emerald City Comic Con, and I have photos of me dressed up with both Rucka and Williams. It was beyond awesome, especially since Alice was a character they’d developed and I was the first one to ever cosplay her.

Your best geek tip or trick for managing everyday work and life: Syncing all my calendars, invaluable when I’m figuring out my schedule or where I’m supposed to meet my friends for dinner.

Kirk, Picard, Janeway or Sisko? Picard all the way. When I was younger, I always wanted him to be my father. I know, he hated children, but he never did in my elementary school Mary Sue fanfiction.

PC, Mac or Linux? I’m a PC woman all the way. I like the customizations and flexibility compared to Macs, but I still need to use Photoshop, which Linux doesn’t have.

Transporter, Time Machine or Cloak of Invisibility? No spaceship option? Transporter for the convenience. I hate driving. That and I’d love to go have lunch with friends in California on a weekday.

If someone gave me $1 million to launch a startup, I would… make GeekGirlCon the best convention ever, of course.

I once waited in line for… I don’t have that kind of patience. I did once wait to be right in front of the stage at a festival to see David Bowie. Most amazing concert ever.

Greatest Game In History: Ducktales for the original NES. 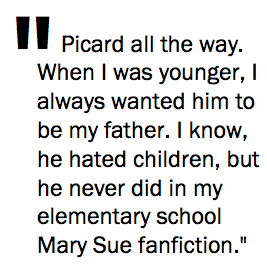 Best Gadget Ever: Sonic lipstick. Okay, actual technology, either my smart phone or self-check outs at the grocery store.

First computer: After begging my parents for years — seriously, my grandma had a personal computer and the internet before we did — for Christmas when I was 12, Santa brought a Compaq with Windows 1995 and a 28.8k modem. My parents have no idea how many years of fundamental computing I missed out on. I’m still the only tech geek in my family.

Current phone: G1. I’m waiting to see what happens with the T-Mobile and AT&T merger before I make a decision about upgrading.

Most important technology of 2011: I’m really excited about the emerging green technology for vehicles, including MSU’s wave disk generator and the further refining of electric engines.

Most important technology of 2015: Advances in tablet technology so it would be practical to use. Actually, what I really want is an e-ink tablet I can hook up a keyboard on for writing and with decent internet access to store my writing on the cloud and publish on my blog. That’s my selfish request.

Parting words for your fellow geeks: Never be afraid to be your geeky self.

Geek of the Week is a regular feature — making its GeekWire debut today — profiling the characters of the Pacific Northwest technology community. Do you or someone you know deserve this distinguished honor? Email us at tips@geekwire.com.

[Geek of the Week photography by Annie Laurie Malarkey]