At Microsoft’s  MIX conference in Las Vegas this morning, the company announced a series of enhancements for the next version of Windows Phone, code-named “Mango,” due out this fall. 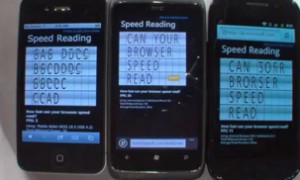 But what really caught our attention was the speed test comparing the performance of the upcoming IE9 for Windows Phone vs. browsers on the iPhone 4 and Nexus S (Google Android). See the video above from Microsoft’s webcast.

As we’ve learned in the past with these things, the devil is in the technical details, but on the surface, at least, it’s impressive. The hardware acceleration in the browser is an example of Microsoft leaning on its PC expertise as it tries to come from behind in smartphones.

Among the enhancements planned for the Mango release: Better multitasking for third-party apps, deeper integration between apps and Live Tiles on the home screen, and the ability for developers to access more of the phone’s core features, including motion-sensing capabilities and the camera, for augmented-reality apps.

During the MIX Day 2 keynote, Windows Phone VP Joe Belfiore announced a date for the release of Angry Birds on Windows Phone — May 25. The company also previewed upcoming Windows Phone apps, including Kik Messenger, Qantas and Amazon Shopping. Plants vs. Zombies, from Seattle’s PopCap Games, is coming to Windows Phone, as well.

Without referring to geography, Belfiore also talked about plans to bring to Windows Phone the popular Spotify music service, which has long been seeking to extend its reach from Europe to the U.S.

As part of the presentation, Belfiore repeated his earlier mea culpa for the delays and other problems with the company’s latest Windows Phone updates and said Microsoft has learned from the experience.

App developers are scheduled to get access to the updated Windows Phone tools in May. The company says the Mango update will be available later this year for both new and existing Windows Phones.