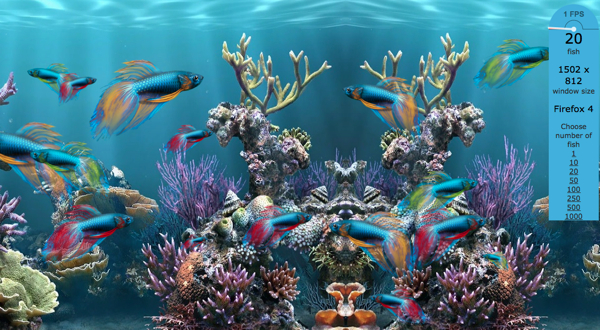 Since its earliest previews of Internet Explorer 9, Microsoft has been pointing to its IE9 Test Drive site for demos of speed, graphics and other aspects of browser performance. IE9 performs extremely well in the demos, and in many cases the results look almost embarrassing for Firefox and Chrome.

So what’s going on behind the scenes? In my recent interview with Johnathan Nightingale, the Mozilla Firefox engineering director, I asked for his take on the situation. Perhaps not surprisingly, he said there can be more to these tests than meets the eye. His favorite example, he said, is the fish tank — a demonstration in which users can add up to 1,000 fish to a virtual aquarium. In IE9, they zip around like speed demons. In Firefox, they barely budge.

The problem, Nightingale said, is that Microsoft is not using WebGL, the 3D web standard, because IE9 doesn’t support it.

“They have to do it using Canvas 2D, which is a technology they do support, and it’s great, because it’s an open web technology, so it’s nice to see them trumpeting it. But it’s not actually what any developer would choose to use for 3D graphics,” he said. “You would use a 3D API for that. What’s funny is that if you reimplement the fish tank demo using WebGL, it screams on any browser that supports WebGL,” including Firefox.

[Related Post: Firefox 4 Do Not Track: How it works, what it really means]

So why doesn’t IE9 support WebGL? Here is Microsoft’s response:

“Regarding WebGL, there are other browser vendors that are implementing WebGL as a way to get some kind of hardware acceleration after developers rewrite their code. With Internet Explorer 9, developers receive GPU-powered hardware acceleration without rewriting a single line of code which we feel is a better outcome. There has been great success with 3D in various arenas, like IMAX movies, but in looking at broad range of browser users we did not think this was an area that was realistic for us to focus on at this stage of browser development.”

The back-and-forth between the companies is the backdrop for a fierce competition for market share. Internet Explorer is still the dominant browser, with more than half the worldwide market, despite declines in recent years. The Firefox 4 download counter is approaching 19 million since the release of the new browser two days ago, eclipsing the numbers that Microsoft’s IE9 has seen, thanks in part to Firefox 4’s support for multiple operating systems and older Windows versions.

And Google Chrome, fresh out with a beta of its next version, has been surging, as well.

At the very least, Microsoft’s IE9 demos got the attention of the Firefox team. Nightingale said one of the Firefox developers rewrote the fish-tank demo with WebGL. In testing their alternative version, they ended up needing to increase the number of fish beyond Microsoft’s maximum of 1,000 to as many as 10,000 to start hitting the limits of Firefox 4’s capabilities.

That’s what happens, he said, “once you’re using the right standard, instead of the one you happen to have shipped.”

Just goes to show, it case it wasn’t obvious before: The browser wars are back.