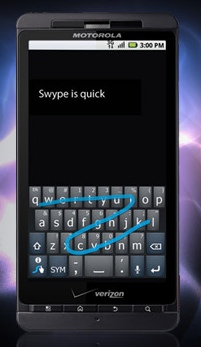 Swype founder Cliff Kushler invented one of the most innovative text-input technologies, allowing users of touchscreen devices to quickly input text with the simple swipe of the finger. But not everyone “Swypes.” And for those who don’t, the Seattle startup is working to add the more traditional method of inputting text: tapping.

That may seem a bit old-school. But Swype, whose software has been installed on more than 25 million mobile phones and tablets, felt it was necessary to offer consumers choice on what type of keyboard interface they’d like to use.

“There’s no one product that’s going to work for everybody, some people are still going to prefer tap,” Kushler tells GeekWire.

We got a sneak peak of the new technology from Kushler and CEO Mike McSherry after the company was recognized earlier this week at the Governor’s Trader of the Year Awards.

Swype plans to begin shipping the new system to tablet and handset makers next month. It could be in consumer’s hands (or fingertips) some time this summer.

It’s a pretty nifty concept, with users able to choose whether they want to tap out words or “Swype” them.

“We have not had a predictive tap. This is going to be competitive with the iPhone, Android keyboard,” said McSherry. “So, if you pick up a device you can tap or Swype on it. It doesn’t matter.”

Over time, McSherry believes most consumers will transition to “swyping” in part because of the speed.

Of course, the engineering challenge of tapping out letters on a touchscreen keypad is not quite as complex as Swyping. “Swype is definitely harder,” said Kushler.

So, why wait until now?

McSherry said there had been some potential intellectual property concerns, but those fears have subsided in recent months making it possible to integrate tapping.

Kushler’s other key invention, Tegic’s T9 text input has been installed on more than five billion phones worldwide. And Swype, which has absolutely been rocking its sales in the past 12 months, is looking to follow in those very big footsteps.

“(T9) is quite possibly the world’s most prolific technology,” said McSherry in remarks at the Governor’s Trader of the Year Awards Reception in Seattle on Monday. “We have similar ambitions with Swype.”