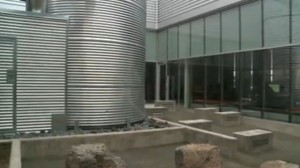 Facebook today announced that its Prineville data center in Oregon has received LEED Gold Certification from the U.S. Green Building Council, with the company noting that the facility (which recaptures 100 percent of rainwater, includes a solar array and uses cool air from outside the building to reduce heat) uses 38 percent less energy than comparable facilities.

“Innovation was key to achieving our efficiency goals,” the company writes in a post. “We are proud to have pioneered several new technologies in the design and operation here, including new energy-efficient server designs and a low-energy evaporative cooling system that makes use of the low-humidity climate of Central Oregon’s high-desert setting to eliminate traditional air conditioners.”

You can get a video tour of the new facility here.

At the SC11 supercomputer conference, taking place this week in Seattle, GeekWire’s Todd Bishop got an inside look at the servers used to run the Prineville facility.