Dan Shapiro got really frustrated trying to find a new laptop. So frustrated, in fact, that the Seattle entrepreneur decided to start a new company to attack the problem head-on. Sparkbuy, which is launching today at the Web. 2.0 Expo in San Francisco, is trying to change the way that people search for consumer electronics.

Using traditional search engines such as Bing and Google to search for laptops, TVs or other electronics is kind of like trying to find a “needle in a haystack,” says Shapiro. That’s why he thinks the consumer electronic industry needs its own search engine, just as the travel industry has Expedia or Kayak.

“I actually want to search data, but I don’t want to do it with some sort of really complicated interface,” Shapiro tells GeekWire.

Sparkbuy is designed to create a one-stop shop for those interested in researching products. And the site allows users to set up various parameters prior to the search, such as lightweight laptops from Dell that cost under $1,200. 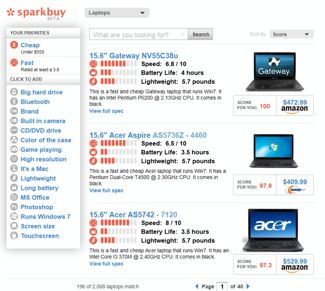 Obviously, there are plenty of Web sites where people can go to get detailed information on laptops or TVs — from Amazon.com to Cnet to Best Buy.

But Shapiro, who previously co-founded Ontela, the mobile photo service which merged with Photobucket in 2009, thinks there’s a big difference.

Sparkbuy is made up of seven people, including four employees and three contractors. The company is located in the TechDwellers incubator space in Seattle’s Georgetown neighborhood, which speaks to the lean startup principles that Shapiro is employing at the new company.

But building a new startup is taking its toll on Shapiro. The father of young twins discusses the challenges of kickstarting new entrepreneurial ventures at this stage of his life.