With more than a dozen lawyers looking on — representing Google, Apple, eBay, Yahoo, Facebook and other Internet titans — a federal judge in Seattle heard arguments yesterday in the lawsuit brought on behalf of Paul Allen’s former Interval Research lab.

But the question on the docket wasn’t whether the Internet giants violated the defunct lab’s patents. No, the first order of business for U.S. District Judge Marsha Pechman was simply figuring out how to manage a suit that involves no fewer than eleven defendants, complicated behind-the-scenes technologies and thorny intellectual property issues dating back to the dawn of the web.

“What I know about computers is really minimal. If you want me to understand these patents then you’ve got to start educating me,” the judge told the lawyers from the bench, advising them to treat her as if she were an intelligent, teachable eighth grader.

That prompted Gerald Ivey, a lawyer representing AOL in the case, to point out that the average eighth grader is about as tech-savvy as they come these days. Pechman promptly revised her advice — telling the lawyers to treat her as if she was their mother.

The hearing highlighted the increasing complexity, size and pervasiveness of patent lawsuits among giant technology companies.

Beforehand, Pechman told the lawyers in a prior case to clear out their materials to make room for the “cast of thousands” that would be coming in for the Interval hearing. She invited the lawyers in the Interval case to sit in the cushioned jury seats to make room, but they all squeezed into the area behind the defendants’ tables instead. In weighing the issues during the hearing, she remarked at times on the potential load on the court clerk’s office.

Logistics aside, the primary purpose of the hearing was to hear arguments over an effort by the defendants to split the lawsuit — originally filed against them en masse — into separate cases. Although many of them are accused of violating the same patents, their lawyers said the similarities between the claims end there, involving different products, technologies and issues.

Lawyers for the defendants agreed that certain pretrial proceedings could be combined, but they argued for substantially separate trials, because of all the different issues. 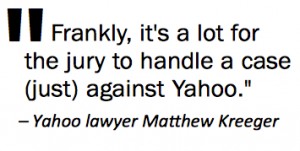 “Frankly, it’s a lot for the jury to handle a case against Yahoo,” let alone the others at the same time, said Matthew Kreeger, a lawyer representing Yahoo in the case. He said about 40 products are at issue in the case involving his client alone.

John Vandenberg, a lawyer representing Netflix, Office Depot, Staples and eBay, told the judge that splitting such cases into multiple suits might also have the beneficial effect of discouraging sweeping patent suits against large casts of defendants. He cited the recent example of Priceline founder Jay Walker suing many of the same companies for patent infringement.

Justin Nelson, a lawyer representing Allen’s Interval Licensing LLC — the entity that holds the rights to the patents — disagreed with the plaintiffs’ arguments for separate trials. “The reality is that there is a huge, huge overlap in what the jurors will hear and the parties will present,” he told the judge. 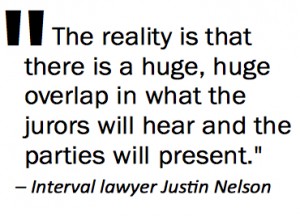 The suit alleges violations of patents on fundamental approaches to browsing, displaying and alerting people to information online. It was originally filed last August and was resubmitted by Interval Licensing in December (PDF, 35 pages) after it was initially dismissed on procedural grounds.

Allen has drawn widespread criticism for the suit, but he defended the case when I asked him about it during an on-stage interview Friday night at Town Hall in Seattle, as part of his book tour. He pointed out that such lawsuits are “extremely commonplace,” pointing to the latest example of Samsung and Apple suing each other over patents related to the iPad and Galaxy Tab.

“We basically looked at different ways to license some patents we had from the times that I invested in Interval — and I think there’s some very interesting ones there — to a number of different companies,” the Microsoft co-founder said, explaining the efforts that preceded the decision to file suit.

At the conclusion of the hearing Monday afternoon, Pechman made a procedural ruling to sever the case but then immediately consolidate it for purposes of pretrial activities and hearings, at least, keeping a single docket and case number. The effect is to leave the door open for some separate proceedings for the various defendants when the suit gets to trial.

However, in the unlikely event that all eleven defendants end up going before a jury without settling, the judge made it clear that she wouldn’t be holding eleven completely separate trials, and would instead seek to combine some elements for purposes of simplicity.

“I don’t know what it’s going to look like,” she said, “but I like to be fairly creative.”