Some people go camping on Labor Day Weekend, while others fire up the BBQ. But an awful lot of folks seem to have chosen to command a fleet full of steampunks. That’s the premise behind the new iPad game Crimson: Steam Pirates, published on Sept. 1 by Bungie Aerospace.

The highly-anticipated title, developed by gaming veteran Jordan Weisman of Harebrained Schemes, has quickly risen up the charts in Apple’s App Store, and it is now ranked as the most downloaded free iPad app. IGN notes that the game “presses several key nerd buttons: Steampunk! Pirates! Airships! Turn-based Strategy!” 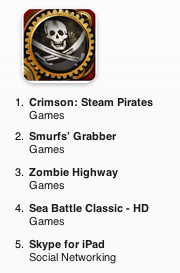 IGN wasn’t thrilled with the game, but reviews in Apple’s App Store have been absolutely glowing. The vast majority have been in the five star category, with one game player noting that Crimson is “one of the most fun and best polished games I’ve played on the iPad.”

Apple chose the title as the iPad game of the week, one of the reasons it is attracting so much attention. While it is free to play for the first eight missions, Crimson features an expansion pack for $1.99.

Crimson marks the first release under the Bungie Aerospace initiative. Launched in June, Bungie Aerospace is a new effort from the original creators of “Halo” to help small, independent game studios launch mobile and social games.

Crimson is a true Seattle effort. Not only are Bungie and Harebrained Schemes based in the region, but the game was also built using Moai, the mobile-game platform from Seattle startup Zipline Games.