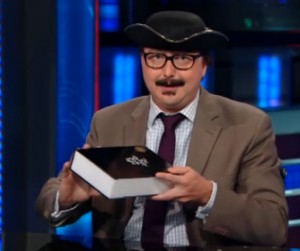 For one, he suggests getting rid of the “old-fashioned” book shelves, replacing them with “beautiful, well-appointed downloading pods.”

Hodgman continued with a hilarious rant on book store employees. “These are the type of people who used to work at video stores, before they went under…. If book stores fall, Jon, America will be inundated with a wandering, snarky underclass of unemployable purveyors of useless and arcane esoterica.”

Here are some of Hodgman’s other suggestions, including hosting “in-store writings” by authors and turning Borders into a “book store” preserve in the style of colonial Williamsburg.