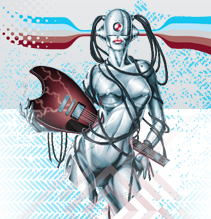 One of the most-anticipated activities at next month’s Seattle Interactive Conference will be opening night’s Battle of the Geek Bands, a fast-paced competition in which five bands from the tech industry take to the stage at the Showbox Sodo.

Now, here’s the deal: Four of the bands have already been chosen by the SIC committee from a pool of more than 30 entries. That leaves one opening slot.

And here’s the cool thing. GeekWire readers will have the last word between the two final contenders: Afraid of Figs and The Baudboys.

Watch the videos, and cast your vote for your favorite in the poll below. Voting will take place through Monday, October 24th at 5 p.m. at which point SIC will announce the five finalists, including the wild-card, community-supported entry chosen here.

Bands will take the stage November 1st, performing at the Showbox Sodo in front of an illustrious judging panel that includes Sir Mix-A-Lot; Chris Ballew and Jason Finn of the Presidents of the United States of America; and yours truly.

So, without further ado, here’s a look at the two contenders for the final slot with descriptions of both. Don’t forget to vote in the poll below.

Afraid of Figs: Saxophonist Chris Bloomquist works as a technical recruiting manager at AltaSourceGroup in Kirkland.

Afraid Of Figs from Seattle Interactive Conference on Vimeo.

The Baudboys:  The undisputed kings of “Geek A Capella,” the group is comprised entirely of current and former Microsoft employees.

The Baudboys from Seattle Interactive Conference on Vimeo.

Now, after watching the performances above, who do you think is most deserving?

UPDATE: The voting has concluded, and Afraid of Figs has been declared the winner. See our follow-up story: “Meet the five finalists vying for the title in next week’s Battle of the Geek Bands”

Editor’s note: GeekWire is a media sponsor of the Seattle Interactive Conference.