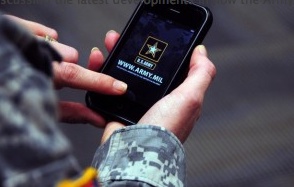 The U.S. Army is nearing the conclusion of a six-week test of more than 300 smartphones and tablet computers, analyzing how the gadgets could be used in combat situations. CNN reports that the Army tested a wide variety of Android, iOS and Windows Phone 7 phones, utilizing everything from GPS to cameras to text messaging.

The tests have gone relatively well, with Army officials noting that the smartphones could be shipped to troops overseas as early as this year. But there have been some troubles too.

CNN notes that the Army had some troubles testing the iPhone in New Mexico and Texas — in part because of the spotty AT&T coverage in the region. A Samsung device running Android also encountered problems in the field, and then there was the phone that was run over by a truck.

Using a touchscreen device also poses challenges for troops who are heavily-equipped with body armor and gloves, but special gloves that work with the devices have been utilized. There are also security issues to be addressed in terms of the proper encryption necessary to make sure that communications are secure.

An official for the Army said that they will like choose two mobile operating systems, adding that off-the-shelf hardware could be much cheaper to deploy than existing mobile communications devices.

The Army also is working on its own app store to feature military-oriented mobile applications.

And the U.S. Military is not just investigating the use of mobile devices in the field. It is also looking to tap the power of social networks, with Wired reporting on the new Social Media in Strategic Communication (SMISC) program.