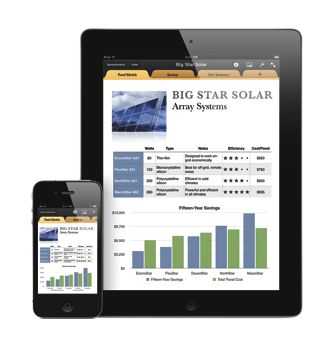 Apple this morning debuted versions of its iWork productivity applications for iPhone and iPod touch, adapting the Pages word processing, Numbers spreadsheet and Keynote presentation software for use on the smaller iOS devices.

The programs will be available for $9.99 each, or as a free update for users of the existing iWork apps for Apple’s iPad.

So what about Microsoft Office? For years now, one of the questions surrounding Microsoft’s Mac Business Unit — the group that makes versions of Office for Apple computers — has been its plans to bring Word, Excel and other Office apps to the iPhone (and now iPad). If the Redmond company has something in the works, it’s keeping its plans close to the vest.

Microsoft has released a version of its OneNote note-taking app for iOS devices.

Here’s the statement from the Redmond company in response to our inquiry this morning: “Today, iOS users can view Office documents through OneNote Web App, Word Web App, PowerPoint Web App and Excel Web App. We constantly evaluate where our customers want and need our productivity solutions, but have nothing further to share.”

Separately, Apple this morning gave a sneak peak of its expected announcements at next week’s Worldwide Developer Conference, saying it would show the next versions of Mac OS X (Lion) and iOS (5) and unveil its new iCloud online service.