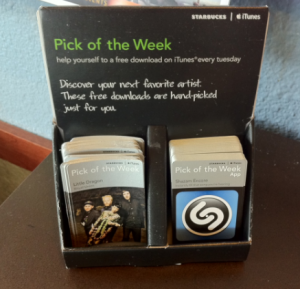 I popped into my local Starbucks this morning, not to buy an iced Latte or vanilla bean Frappuccino. Nope, I was there for the singular purpose of installing a free iPhone app. Shazam Encore to be exact, which normally sells for $5.99.

Starbucks’ customers — as part of a new partnership rolling out with Apple today — will have the opportunity to download the popular music discovery app for free by just popping into a Starbucks store and entering a promotional code into your phone.

On my journey to the Phinney Ridge Starbucks today, the first two employees who I asked about the promotion — which we first wrote about last week — had no clue what I was talking about. They then asked a manager who pointed me to a counter near the front door where the “Pick of the Week” cards were displayed.

Starbucks has offered free music downloads through Apple for the past three years, but adding apps is a new thing. And by starting with a $5.99 app, they are showing a commitment to bringing high-quality apps to where the masses congregate.

It is a good idea. And it could be in response to Amazon.com, which has been gaining traction with its free Android app of the day promotion. (Of course, Amazon.com doesn’t have any brick-and-mortar stores in which to promote the offering, relying instead on Twitter and other social media channels).

In my case, I didn’t even buy anything this morning at Starbucks, which I don’t think is the desired outcome of the coffee retailer. (And just so you don’t think I am a complete cheap skate, my wife had already purchased a coffee drink from the store).

Starbucks plans to roll out a featured iPhone app once a week, with the new game Spy Mouse up next.

“Regardless of the type of entertainment, we promise to continue to provide you with really great content that is fresh, unique, and specially picked just for you,” Starbucks wrote in a blog post. “We hope you love it!”

Yes, we do. After all, who can argue with free.