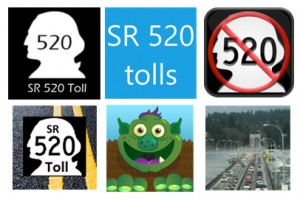 What happens when the state starts tolling a bridge traversed by thousands of tech workers every day? An explosion of apps, apparently.

That’s what we’re witnessing right now in the Seattle region, on the eve of tolling for the State Route 520 Bridge, which connects Seattle to the Eastside headquarters of Microsoft, Clearwire, Expedia and many other tech companies.

GeekWire is tracking a total of seven apps made specifically for the purpose of helping commuters understand the variable 520 tolls and figure out how and when to get to work.

A whopping five of them work on Windows Phone, making this one category where Microsoft’s mobile platform is the undisputed king. But there are good choices for Android and iPhone users, as well.

So which one should you download? We’re actually in a good position to answer that question, because we’ve tried them all. Continue reading for our critiques of each app, and our recommendations. 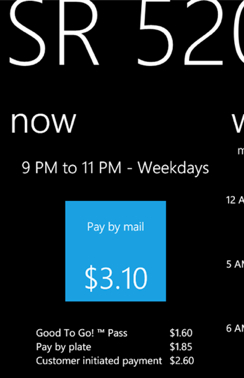 Summary: Just the basics. A simple yet effective app that displays the rate for crossing the bridge at that particular moment of the day, along with charts showing rates for crossing other times of the day and week. Users can set their preferences to indicate their preferred payment method, including paying by mail or using a Good To Go pass. 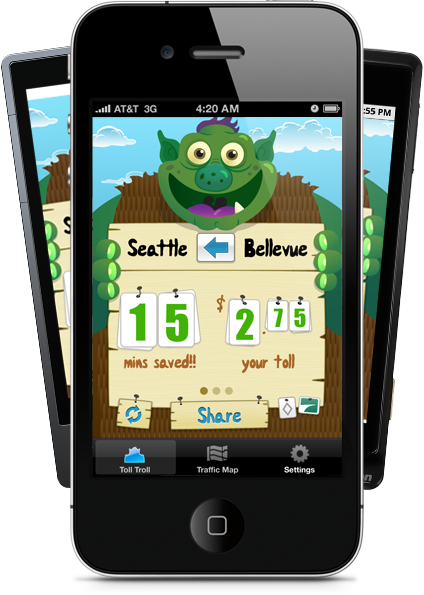 Bonus! That troll is almost cute enough to make us feel better about paying to cross 520. Almost.

Feature request: We wish the algorithm were slightly more sophisticated, also letting us set a maximum toll amount that we would want to pay, then taking that into account when determining the troll’s mood, in addition to the amount of time saved or lost.

Download: Toll Troll is available for iPhone, Android, Windows Phone and as a web app. 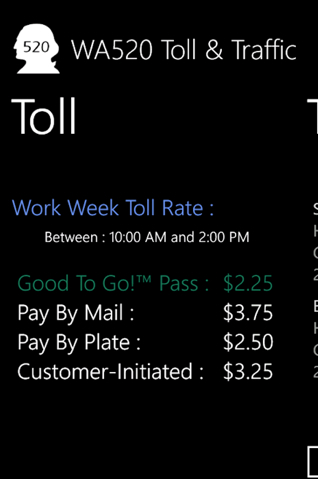 Summary: Comprehensive app that shows the current toll rates for different payment methods; estimated times for crossing the 520 bridge; a traffic map with current conditions on 520, I-5, I-90 and 405; and live views from WashDOT traffic cameras at key points along the route.

Bonus! This app does leverage Windows Phone 7.5’s support for live tiles on the phone’s start screen, showing the current toll for the user’s designated payment method, with an optional thumbnail view of the traffic map.

Bug: In the version of the app we downloaded this week, the feature with the estimated crossing times appears glitchy. It shows only the Seattle-to-Bellevue commute times and not the reverse (and loses a bit of its local cred by misspelling Seattle). 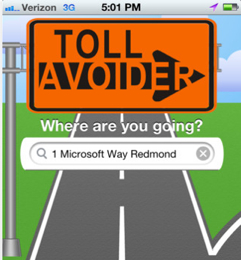 Summary: This iPhone app lets users enter their destination and then summarizes their travel options over Interstate 90 and 520 — with estimated travel time, distance and, in the case of the 520 bridge, the current toll with or without a Good to Go pass.

Bonus! Users who use the built-in tweet function to promote the app are entered into a contest to win toll credits.

Issues: This app isn’t as comprehensive as some of the alternatives for Windows Phone. It also switches to the iPhone’s built-in Google Maps app to show the recommended route, which requires users to navigate back to the Toll Avoider app if they want to change their destination or review their travel summaries again. It also comes with the disclaimer that the travel times don’t include traffic.

Price: Free. The app, by SeaBalt Solutions, is meant in part as a promotional tool for the company’s Park Place parking app, which gets a prominent plug on the Toll Avoider home screen. 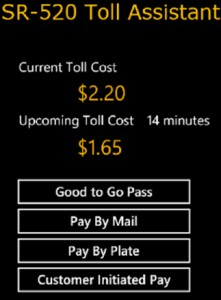 Summary: Nice concept, flawed execution. This single-screen app promises to simplify the complex tolling structure by showing the current toll for the payment method selected by the user, plus the time left until the toll rises, and the amount to which the toll will rise.

Bug: The only problem is that the numbers are wrong in some cases, showing lower upcoming tolls than will actually be charged.

Download (not recommended until bug is fixed): Windows Phone Marketplace 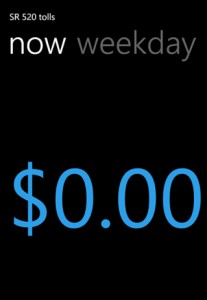 Summary: Like some of the other alternatives, this app displays the current toll for the user’s chosen payment method, but it features the most straightforward interface of them all — simply showing the current toll in big numbers on the app’s primary “now” screen. Other parts of the app show the (accurate) rate grid for weekday and weekend travel, plus a traffic map.

Price: This app comes in a free version that includes most of its features, but users will need to pay for the 99-cent premium version to be able to display the current toll on a live tile on the Windows Phone start screen. That feature is available for free in the more comprehensive WA SR520 Toll app above, making this SR 520 toll rates app difficult to recommend. 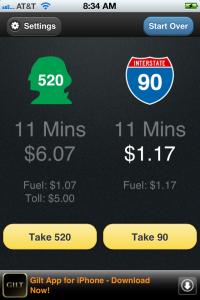 Summary: Conceived and built at Startup Weekend, 520or90 is a slick and easy-to-use iPhone app that allows drivers to input a general destination on either side of Lake Washington (options are Bellevue, Redmond, Issaquah and Seattle)  and then calculate money and time savings. Integration with Facebook and Twitter allows users to broadcast the routes they chose, with the mobile app also collecting “lifetime stats” for the driver.

Bonus! 520or90 smartly factors in both the fuel and toll costs, and the commute times are dynamically updated every five minutes to reflect real-time traffic conditions. Drivers can choose whether they have a Good to Go pass or not, and the tolls change accordingly. They also can pick their style of vehicle (truck, mid-size, hybrid, etc.) and the fuel type (regular, premium, diesel) to get a better calculation on fuel costs while traversing the lake.

Availability: It would be even better if this app were available for download when tolls go into effect Thursday, but we don’t expect it to be. GeekWire got an early look at the app, and creator Gabe Brown tells us the target is a Jan. 4 launch.

Feature request: We’d like the ability to input exact addresses, or at least more specific locations, such as neighborhoods. Traffic congestion maps also would be handy.

Download: Available for download as an iOS app next week, pending Apple’s approval. Windows Phone and Android versions are in the works.

For Windows Phone users, the WA SR520 Toll app is the best overall choice for its free price and nice feature set, including the live tile with updated tolling information on the Windows Phone start screen (without needing to pay for a premium version).

For iPhone users, finally here’s some motivation to switch to a Windows Phone! OK, if that’s not in the cards for you, we give the edge to the 520or90 app for its feature set, if you can wait until it’s available next week. If not, try the Toll Avoider in the meantime.

And for Android or any other mobile platform, the Toll Troll app is a fun (and useful) choice.