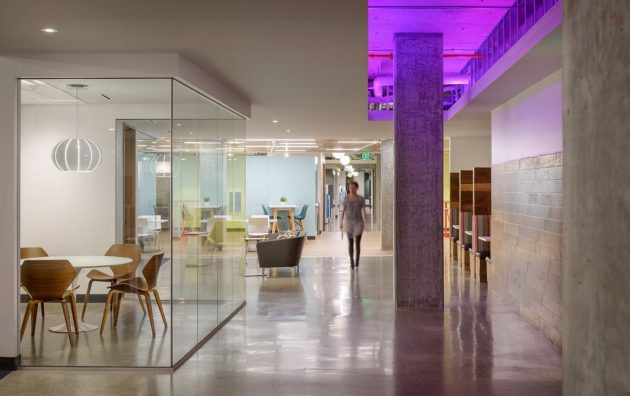 You may or may not be able to think of an instance wherein you’ve interacted with RAIN RFID technology, but it’s fairly safe to assume that at some point, you have. And while Impinj might not be as ubiquitous a household name as some of their South Lake Union neighbors, their leadership in a new technology led them to rapid, exponential growth. This development left them, at the end of a 10-year lease in 2015, at a turning point.

Ten years in the lifespan of a technology company is a lifetime; but those ten years in Fremont were particularly pivotal in the greater context of their industry, leaving Impinj to emerge in a world that worked very differently than the one that existed when they arrived in 2005. Two years into Impinj’s lease, the introduction of the iPhone changed the way people work – indefinitely. Organizations in 2015 were more mobile, open, and connected than they could have imagined 10 years prior. And given those changes, Impinj had some decisions to make.

Given that Impinj’s technology requires the best and brightest software and hardware engineers, their wellbeing as an organization is fundamentally dependent on their engineers’ ability to thrive. Coming from high-paneled cubicles, in the comfort of Fremont, with the luxury of subsidized parking, the decision to move to South Lake Union would not come without questions. They vowed they would never be a sea of small, densely packed desks, but to move forward, changes were inevitable.

With the goal of improving every aspect of their workplace, Impinj’s South Lake Union office, now lived-in for over two years, embodies the countless proactive conversations held leading up to their move. Senior Manager of Facilities, Leya Barr, partnered with local firm Weaver Architects, began doing her research – visiting local offices, consulting her friends of the “Facilities Mafia” (her words, not mine), and digging through YouTube videos to see what was out there. Images were pasted around the office with Post-It notes for employees to provide feedback; town hall meetings were held. If employees could vocalize their priorities while wrapping their minds around the process, she felt, that vision of an improved workplace would be realized.

While Barr and her team realized that different individuals have varying needs, their goal was to create a workstation that served all employees equally. Knowing that people need the comfort of their own spaces to think, process, and actually get work done, the need for visual privacy and employees’ concerns about noise led to a workstation design more robust than many young technology companies in Seattle are familiar with. To free up lab space, employees are given ample room at their own desks to tinker with products in development. Tackable panels absorb sound while creating a space for photos and personal items. 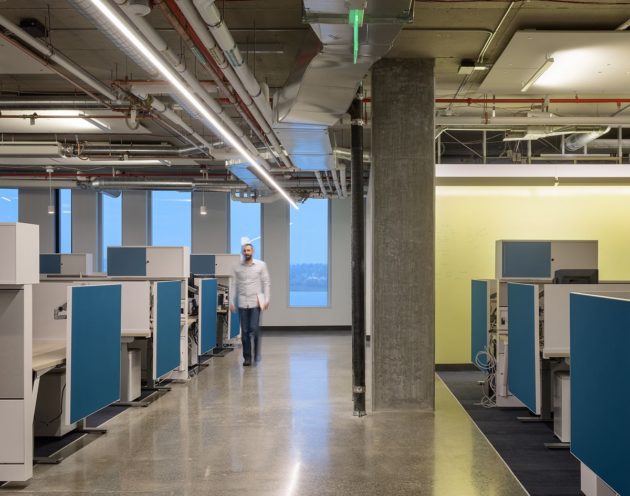 For a company whose technology is evolving and growing in application, the importance of bringing brilliant minds together and creating a community with shared passion is crucial.

One of the most impactful results of the design process is the team rooms. Research shows that the vast majority of meetings include between three and eight people, and most employees spend less than half of their time working alone (see: Immersive Planning). To accommodate, Impinj created a “team room” for every individual team of engineers, each equipped with top-notch AV connections to enable work to happen anywhere. To bring employees of all functions together, their kitchen amenities were centralized. To Barr’s point, it took employees about a day to push together the tables. This natural sense of community, she says, embodies the culture of Impinj. 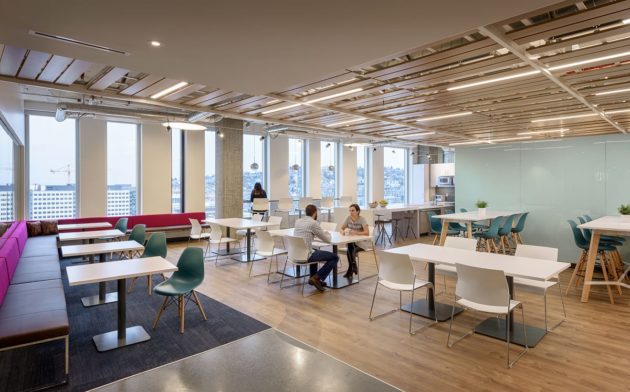 Change is uncomfortable, and a move from the comfort of a residential neighborhood to the urban epicenter of Seattle’s growth is especially so. But with the right planning and employee engagement throughout the process, Impinj’s “new” home represents the people who make it up. “The space is ultimately for them,” Barr says. And it is. 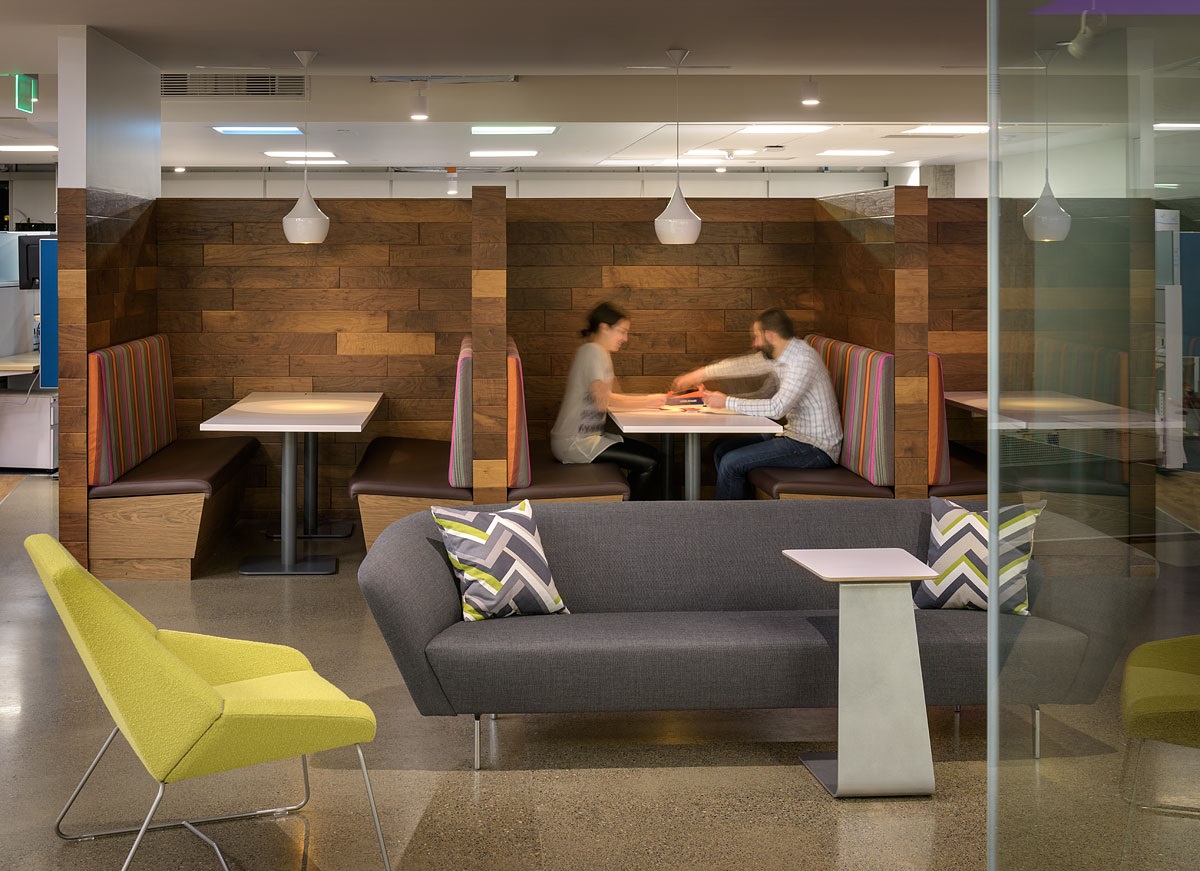 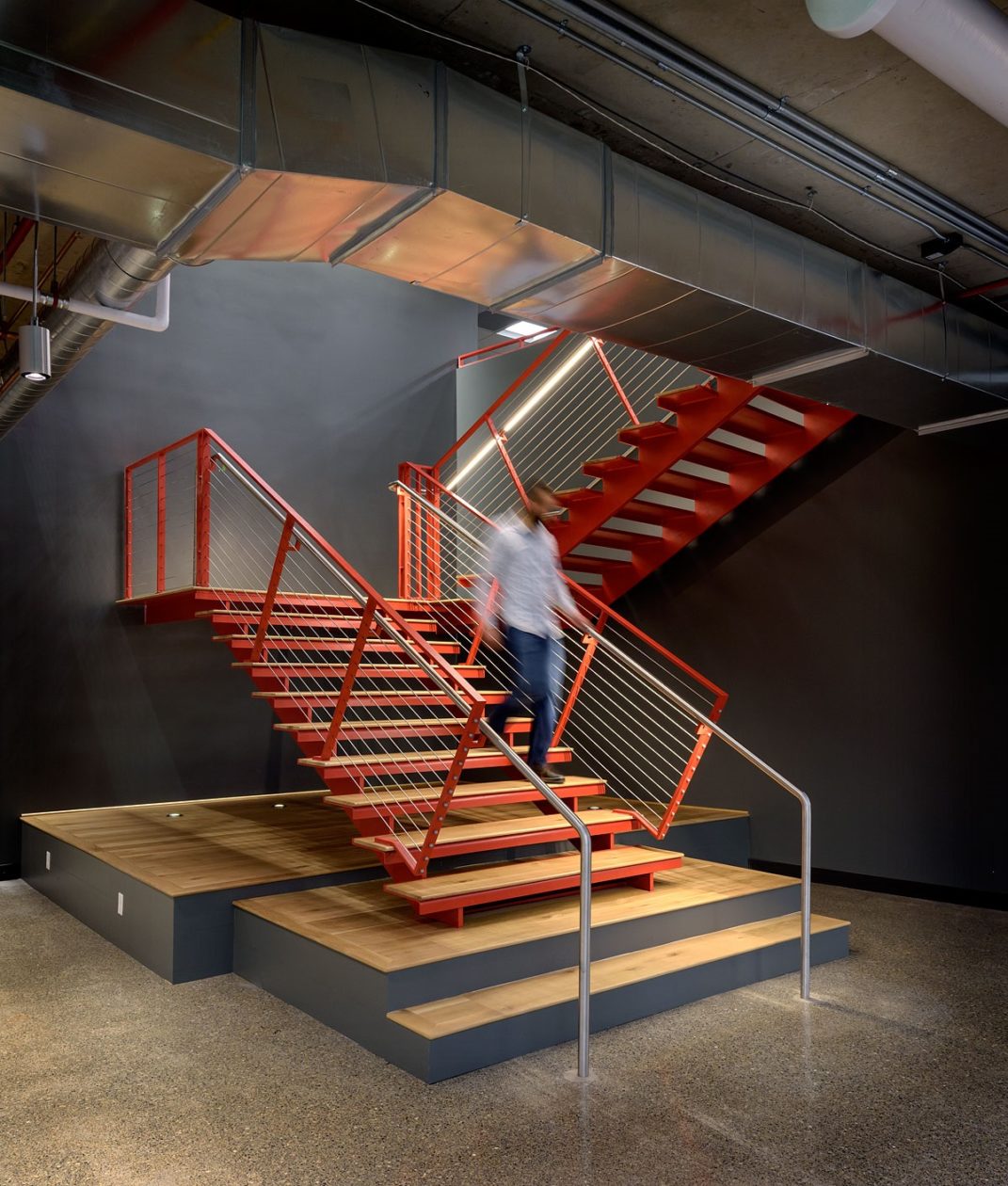 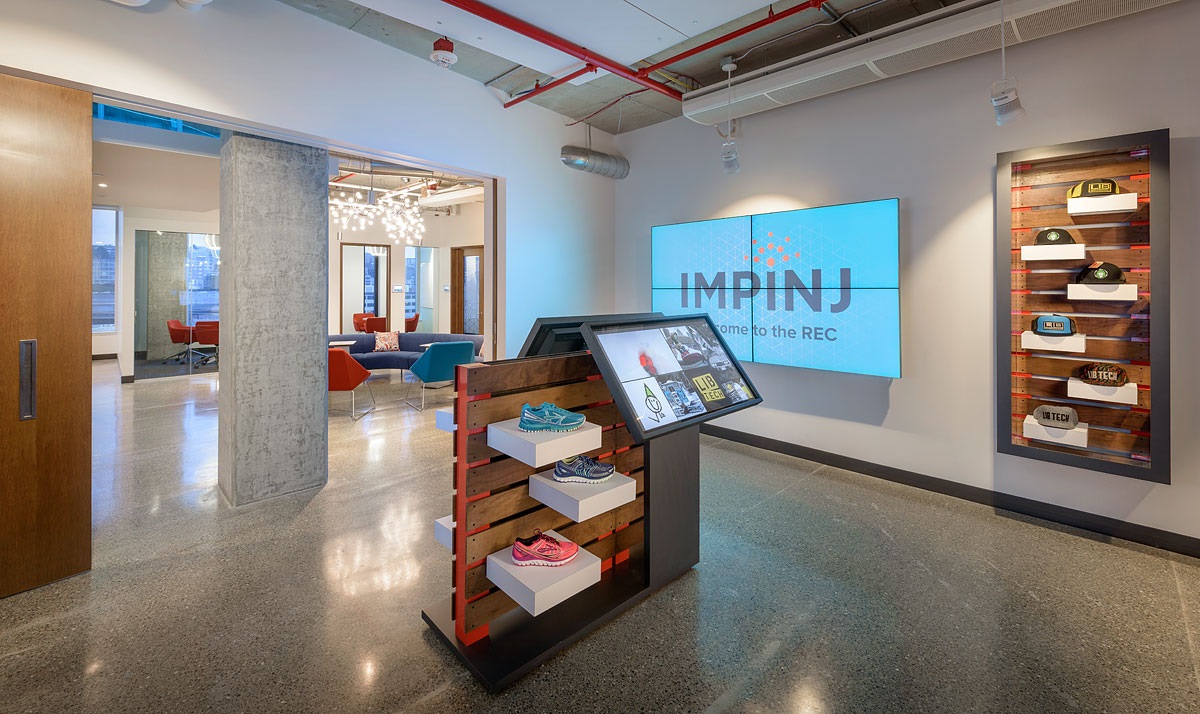 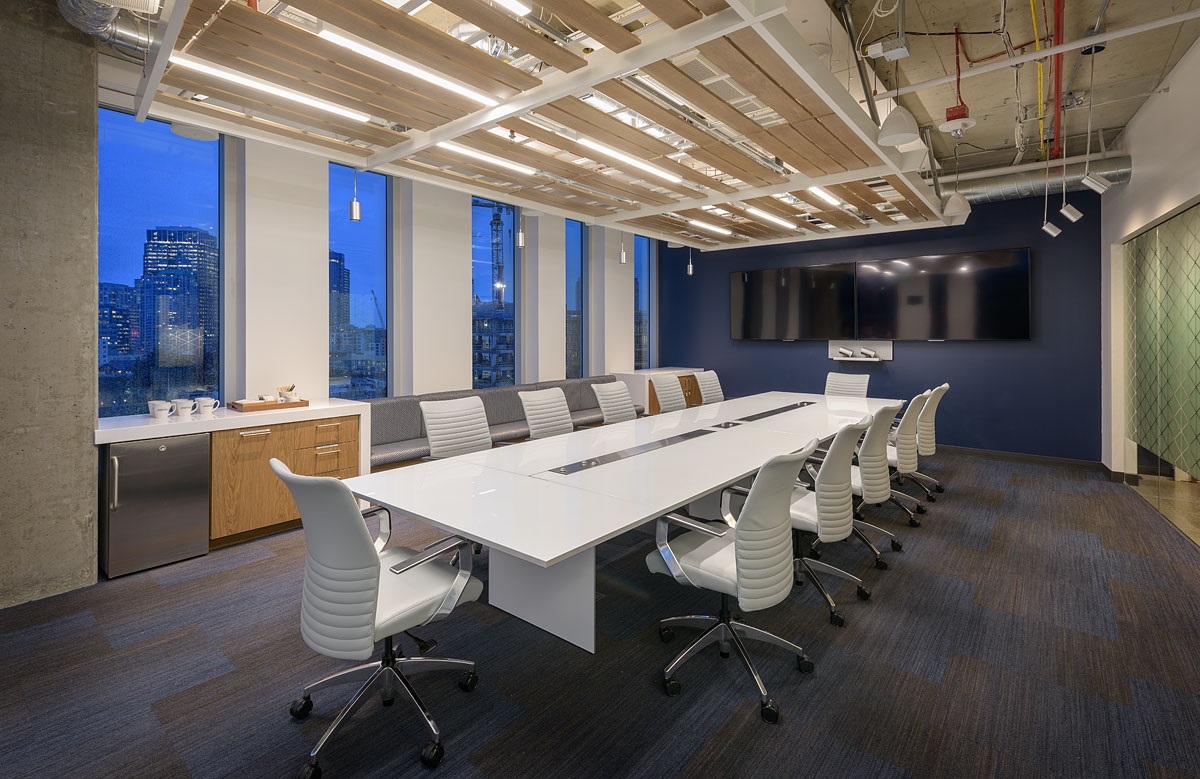 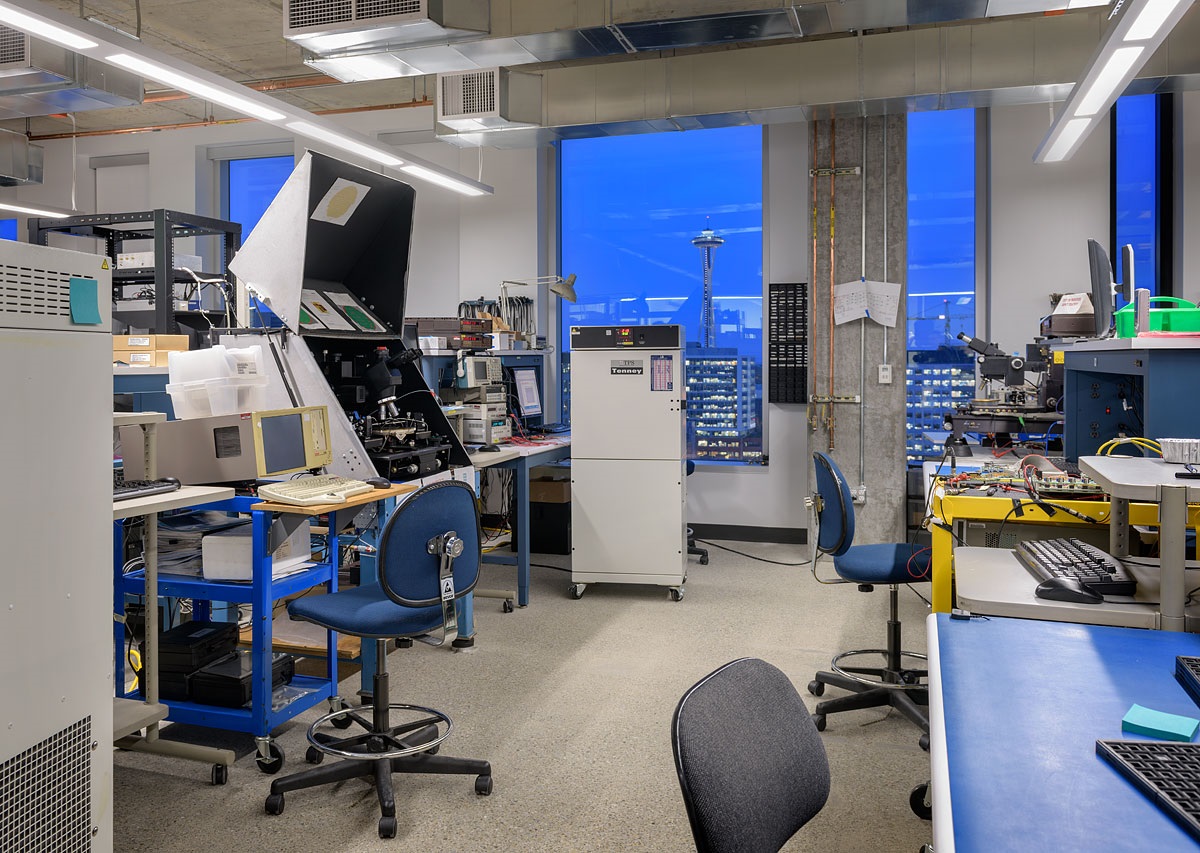 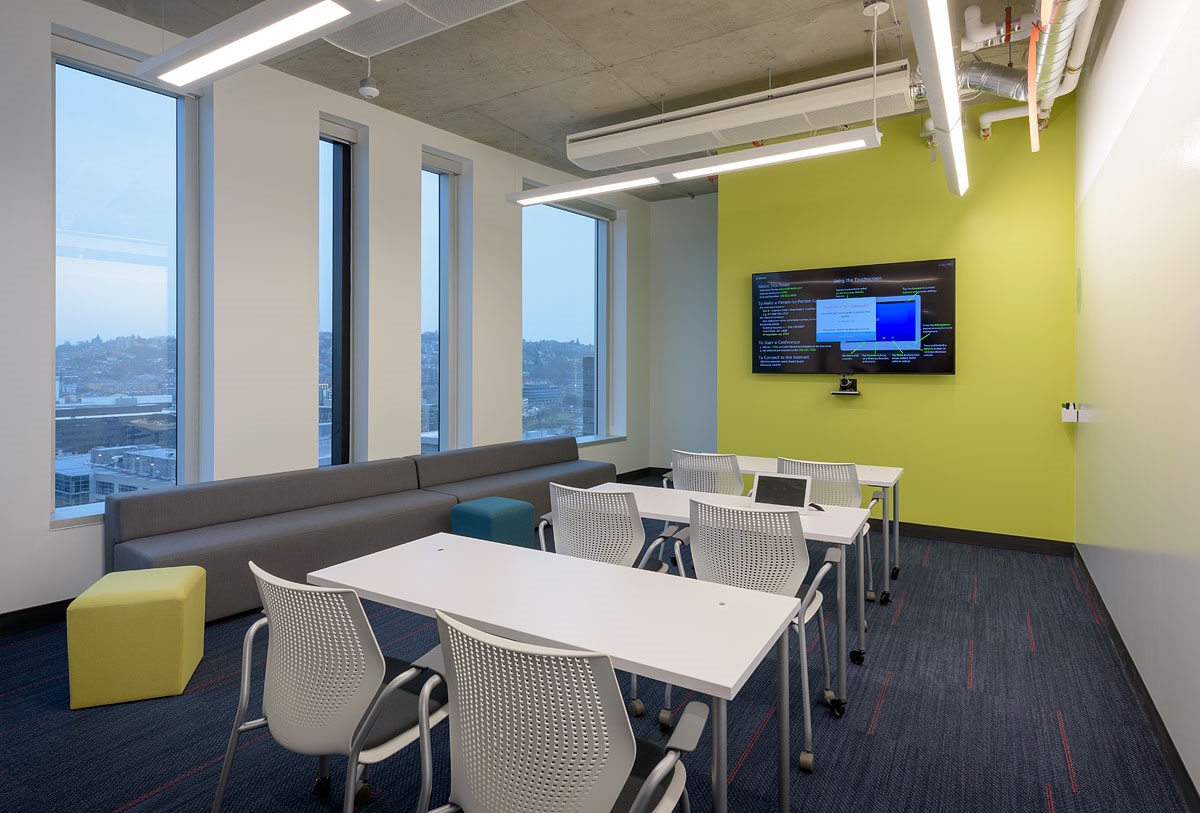 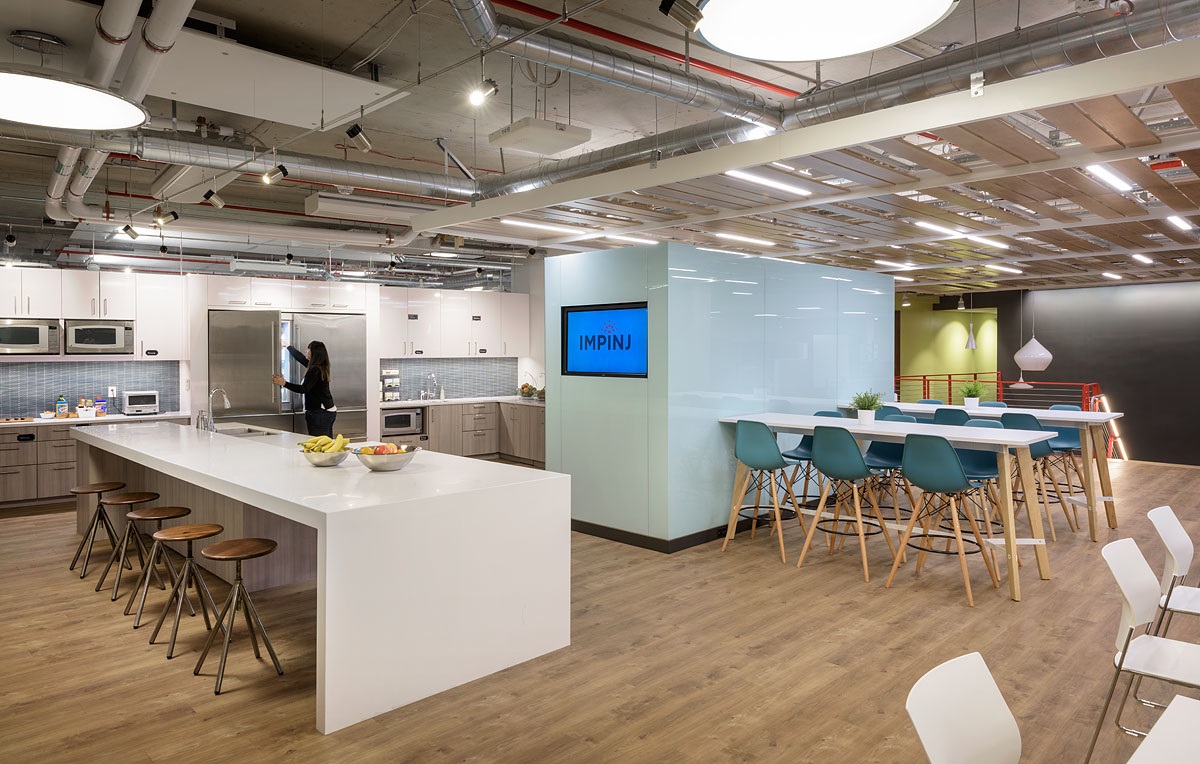