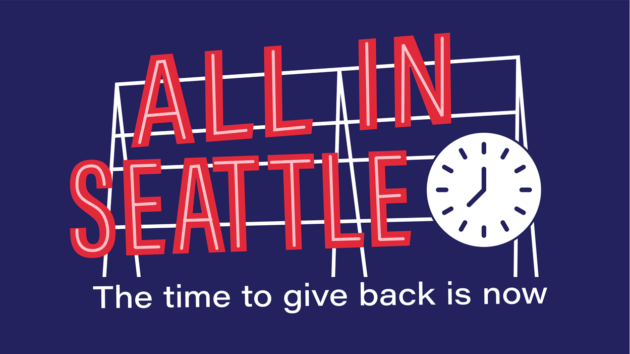 Seattle community members join forces to ignite a call-to-action to lean in and rapidly deliver resources to individuals and businesses in need.

Join #allinseattle by giving what you can to help your neighbors www.allinseattle.org.

Seattle, WA March 23, 2020 – Today an initiative, #allinseattle, launched with more than $27 million in pledged donations from individuals and entities to local organizations that are directly working with people affected by the COVID-19 crisis. The group is calling on others in the region – and community and business leaders around the country – to donate to the organizations that are helping people in their communities get the support they need to make it through these turbulent times.

The group formed through a groundswell of concern and emotion, working to identify organizations with minimal overhead who are on the ground now, providing individual assistance for food and shelter needs, and helping small businesses facing closures in the greater Seattle region. Formed just four days ago – the group has worked quickly to raise needed funds.

“The most notable and inspiring result of this grassroots effort is both the number of people and organizations who have stepped forward to help their local community, and the generosity of their contributions. To raise $27 million in just 72 hours is staggering,” said Rajeev Singh, CEO of healthcare company Accolade. “But #allinseattle is not a moment in time. It’s a plea for others to give whatever they can – be it a $5 donation or $500 donation – to show love and support for the people and communities in which we live. There’s no better time than now.

After seeing the plight of so many community members deeply impacted by restaurant closures, businesses having to scale back, school closures, and the pressure on healthcare workers, the individuals involved in #allinseattle, including Soozi and T.J. McGill, Carol and Matt McIlwain, Noreen and Kabir Shahani, Jill and Rajeev Singh, Heather and Steve Singh, Heather and Ric Redman, started  working with local government, business, and community organizations, including Challenge Seattle,  to identify 501c3 organizations and other funds, such as rent relief programs, that are directly addressing citizens’ needs. The group has been a driving force in building the momentum for #allinseattle.

“This is an incredible time for our community and for communities around the country to identify who needs help and act quickly to donate and support the organizations that are working 24/7 to provide needed assistance,” said Heather Redman, co-founder and Managing Director, Flying Fish Partner.  “The need will be great in every corner of the nation and we hope #allinseattle will inspire others to dig deep and give to the organizations that they are passionate about.”

The group announcing donation pledges today consists of more than 201 people & entities who come from all walks of life – sports, community building, business.  #allinseattle is a template that communities across the country can use to develop a grassroots fundraising campaign to activate people with the ability to give everywhere.

#allinseattle is not collecting funds or dispersing them, it is a rallying cry meant to inspire individuals to give directly to the organizations working on the ground right now. Visit www.allinseattle.org to learn more and help the cause.

Initial members of All In Seattle:

Ivone & Oren Etzioni and A12 team