Our five GeekWire Awards finalists for Big Tech CEO of the Year work across various industries but they share several leadership traits in common — namely the vision, fortitude, creativity, and that impossible-to-define X-factor it takes to helm the ship of a fast-growing tech organization. 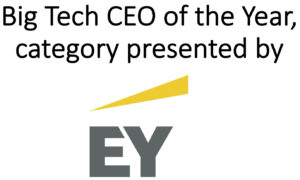 This award recognizes the leader of a tech company with more than 200 employees. The five finalists for Big Tech CEO of the Year are Dan Lewis, CEO of Convoy; Matt Oppenheimer, CEO of Remitly; Karl Siebrecht, CEO of Flexe; Raj Singh, CEO of Accolade; and Yvonne Wassenaar, CEO of Puppet.

Community voting is now under way across across 13 GeekWire Awards categories. These community votes will be combined with feedback from more than 20 judges to determine the winner in each category. We’ll announce the results live on stage May 19 at the GeekWire Awards — presented by Wave Business — in front of more than 800 geeks at the Museum of Pop Culture in Seattle. You can register for tickets on the event site or below.

Submit your votes below, grab your tickets, and scroll down for descriptions of each Big Tech CEO of the Year finalist. This category is presented by EY.