If you own a virtual reality headset, you’re going to want to play Half-Life: Alyx at some point. It’s aiming to be as foundational for VR as the original Half-Life was for the first-person shooter, or Half-Life 2 was for realistic game physics. It feels like a sneak preview of how VR will develop for the next generation or so.

The word I keep coming back to is “craftsmanship.” A large team at Bellevue, Wash.-based Valve Software built Alyx over the course of four years, and the final product is a lot like what I imagine you’d get if Stanley Kubrick made a video game. Every individual element of Alyx feels like someone carefully designed it pixel by pixel, unbothered by market forces and in no particular hurry.

This is the first canon Half-Life game in 13 years, since Episode Two ended on a notorious cliffhanger in 2007. Since then, the series has gone silent, aside from fan projects like Black Mesa. While Valve insiders have always said that development on a theoretical Half-Life 3 never exactly stopped, the departure of the series’s three main writers over the course of the intervening 13 years (as well as Valve’s seeming inability to let any of its first-party projects ever release a third installment) seemed to indicate that Half-Life was more or less officially done. When Valve suddenly announced Alyx last November, it was a shock to the system on par with finding out George Lucas had made another Star Wars while no one was looking.

Alyx is set five years before the events of Half-Life 2. The alien Combine conquered Earth years ago, in a short, brutal conflict called the Seven-Hour War, and most of the human survivors live in a handful of occupied cities. City 17 also hosts the Combine’s headquarters on Earth, and you, as a 19-year-old Alyx Vance, live there as a member of the human resistance.

At the start of the game, Alyx’s father Eli is unexpectedly captured by the Combine during a sweep, and herded onto a train headed for the Nova Prospekt prison. Your goal as Alyx is to catch up to that train and rescue Eli before the Combine realize they’ve captured one of the leaders of the resistance.

Your only real edge in this is a pair of “gravity gloves,” built by Eli’s friend Russell. These are a precursor to Half-Life 2’s trademark gravity gun, and enable you to pull objects towards you from across a room. In VR, you point your fist at them, then make a jerking motion to yank them into the air. It’s a little messy and imprecise, but there’s a peculiar satisfaction to it, particularly when you catch and return an enemy soldier’s live grenade, or pull some much-needed ammo towards yourself from the other side of a battlefield. 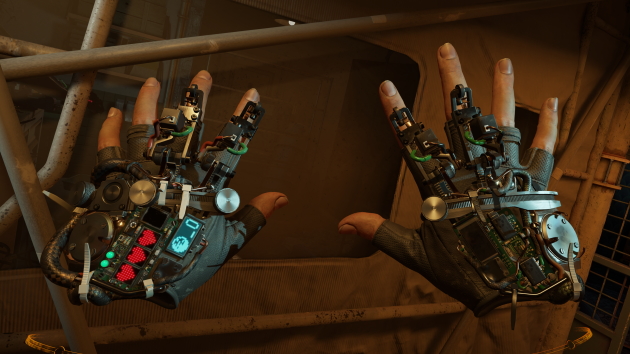 In a lot of ways, Alyx actually feels a little retro. It’s still basically a Half-Life game, which means it’s using what’s become an old blueprint. It doesn’t feature branching narratives, skill trees, extra characters, recharging health, an open world, or any of the other extra features that have ended up bolted onto the standard FPS model since the last Half-Life game in 2007. It’s a story-focused, systems-light, relatively linear first-person shooter, of the sort that’s fallen out of style in the last decade.

Alyx does feature a weapons upgrade system, where you collect resin to make parts with hacked Combine fabricators, which scared me for a second. I was worried it was going to turn into Monster Hunter and I’d end up having to shoot 20 Combine goons until one of them coughed up the specific part I needed to make an extended magazine. Thankfully, the resin is the only resource you need and Alyx uses it as a reward for exploration, available from almost every locked room, closed drawer, cluttered shelf, and dead end you pass along the way.

Otherwise, Alyx is a comfortable throwback of a game. There isn’t a lot of cruft to separate you from the action: it’s you, a handful of bullets, and whatever advantages you can wring out of the environment against a well-paced gauntlet of aliens, zombies, and Combine soldiers.

Alyx’s path through the city takes her through a maze of alien biospheres, ruined city blocks, cluttered streets, and desolate train yards. While you do spend a lot of time in bog-standard 2000s-era Shooter Locations (sewers! construction areas! abandoned buildings!), each one is elaborately hand-designed. I’m particularly fond of how it never exactly holds your hand to show you where to go or what to do next; you have to work it all out from context, and there’s almost always just enough of that context that I never felt like I was at a disadvantage.

The moment where Alyx really clicked for me was in an early stage, where I was slowly picking my way through a drainage tunnel under the city that had been half-overtaken by alien flora. I’d just gotten through one fight by the skin of my teeth, and my pistol was empty.

You have to manually reload every weapon in Alyx. You reach over your left shoulder to grab spare magazines out of Alyx’s backpack, then insert them into your firearm and chamber a round. (This is one of the only games I’ve ever played, in fact, where it’ll let you unnecessarily rack the slide on your pistol and eject a live round from the chamber, which wastes the bullet.) 15 hours in, I still haven’t gotten to the point where this is second nature.

A headcrab suddenly burst out of the ceiling at me, so I backtracked up a ladder to get some space to reload. When I looked behind me, the headcrab was angrily jumping in my general direction, but couldn’t get high enough to reach me.

I decided to take advantage of that and shoot the thing from a position of relative safety. I leaned forward to get a bead on it and reached out to steady myself on a nearby safety railing, which of course wasn’t actually there, and nearly fell flat on my face in the middle of my living room.

At that point, I had to admit that Alyx had gotten its hooks into me. I had some difficulty early on with adjusting to the controls, but once my muscle memory kicked in, it was easy to buy into the illusion of actually being there. Once you get a little further in and the environments really start to get surreal, Alyx develops a profound sense of place that makes it even easier to get immersed in its world. 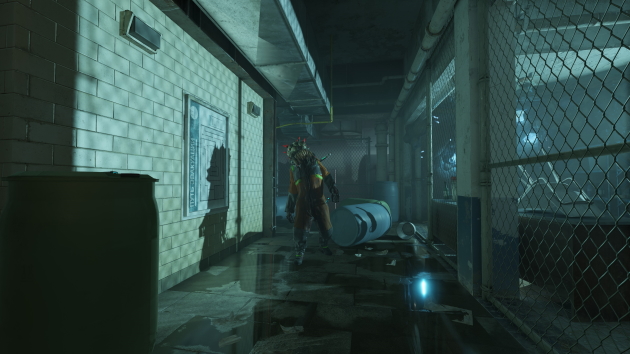 Alyx does have a handful of issues, but most of them seem to be intrinsic to the current state of virtual reality rather than problems with the game itself. My biggest complaint comes from the various hacking and lockpicking minigames, which look cool and are elegantly designed, but don’t quite work as well as they need to. I’m particularly annoyed any time the game requires me to defuse a mine, since it usually requires me to twist my arm into a pretzel in real life to avoid hitting the virtual mine’s tripwire. I also consistently ran into problems where a virtual object would stop responding to my controller inputs, particularly when I was tracing electrical wiring with Alyx’s multitool.

Those are petty complaints overall, though. Half-Life: Alyx, like Half-Life before it, feels like it’s going to end up as a necessary purchase for anyone who’s into virtual reality. There are few if any other original VR games with production values this high, that were made by a team that had this much time and freedom to get things right.

I wouldn’t go so far as to call it a “killer app,” since the cost of consumer entry for VR is still so high (I don’t think any one VR game can be a killer app in the current environment), but Half-Life: Alyx is a top-10 contender for the VR gaming library, and it’s going to have a massive impact on the medium and the genre going forward.

Half-Life: Alyx is available now from digital storefronts for $59.99. It is exclusively meant for virtual reality, and is compatible with the HTC Vive, Oculus Rift, and Windows Mixed Reality platforms as well as the Valve Index.

[Valve provided a digital copy of Half-Life: Alyx and a Valve Index for the purposes of this review.]