Everyone wanted a piece of the Seattle tech scene in 2019, from stock market investors to some of the world’s biggest companies. 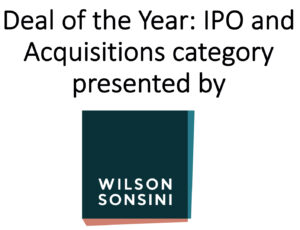 This year’s finalists for GeekWire Awards Deal of the Year, acquisitions and IPOs, include four huge buys. Giants from tech, automobiles and insurance scooped up Seattle startups and tech heavyweights in deals totaling nearly $18.6 billion. And a Seattle biotech company had one of the biggest IPOs of the year, seeing its stock spike more than 100 percent on the first day of trading.

We’ve opened public voting across 13 GeekWire Awards categories, and community votes will be factored in with feedback from our panel of more than 20 judges from the tech community. Community voting ends March 6. Then, on March 26, we will announce the winners live on stage at the GeekWire Awards — presented by Wave Business — in front of more than 800 geeks at the Museum of Pop Culture in Seattle.

Submit your votes via this link or below, grab your tickets here, and scroll down for more about each finalist for Deal of the Year, acquisitions and IPOs. This category is presented by Wilson, Sonsini, Goodrich & Rosati.

Here are the nominees for Deal of the Year, IPO and M&A:

Adaptive Biotechnologies IPO: The Seattle-based biotech, which makes technology to diagnose and treat diseases by reading the immune system, had one of the biggest stock market debuts of 2019, with its shares rising 100 percent on its first day of trading. While the stock has cooled off since then, it remains up nearly 56 percent from its initial $20 offering price.

Adaptive is partnering with Microsoft to use artificial intelligence to diagnose multiple diseases from a single blood test. Co-Founder Chad Robins told CNBC last year he expects to have a product on the market to diagnose diseases in 2021.

In addition to working with Adaptive, Microsoft is also an investor in the company. An IPO filing last year revealed that Microsoft invested $45 million in Adaptive at the time the blood test deal was finalized in 2017. The value of Microsoft’s investment in the company, at $10.67 per share, has nearly tripled.

Prudential acquires insurance tech startup Assurance for $2.35 billion: The financial giant acquired the startup to reach more customers online. Based in Bellevue, Wash., Assurance sells a variety of insurance policies over the internet, but before the deal, Prudential was not one of them.

Beyond the upfront $2.35 billion, Prudential agreed to pay an additional $1.15 billion in cash and equity if Assurance meets certain growth objectives. The three-year-old startup became a wholly-owned subsidiary under Prudential. All 120 Assurance employees joined Prudential as part of the deal.

Assurance self-funded from the start, avoiding raising any outside capital, and it was profitable at the time of the acquisition. CEO Mike Rowell co-founded Assurance in 2016 after leading life insurance platform eFinancial, which was acquired by Fidelity Life in 2009, for nearly 14 years.

Salesforce buys Tableau Software for $15.7 billion: The all-stock deal for the Seattle tech mainstay was the largest acquisition in Salesforce’s history, more than double the $6.5 billion it paid for MuleSoft in 2018. With the acquisition, Salesforce is betting big on data visualization and business intelligence.

Tableau had been on a roll prior to the acquisition, shifting its data visualization software to a subscription service under the leadership of ex-Amazon Web Services executive Adam Selipsky. Tableau remains independent as part of the deal, which effectively establishes Seattle as Salesforce’s second headquarters.

Prior to the deal, Salesforce co-CEO Marc Benioff had long sought to make the Seattle area a strategic part of the business. Last year, GeekWire reported that the combined companies would have more than 3,100 employees in the Seattle region and collectively occupy north of 650,000 square feet of office space.

Automotive giant Lear acquires connected-car startup Xevo for $320 million: The deal combined Xevo’s in-car e-commerce platform with Lear’s expertise in electronic systems. Lear bills itself as a leader in automotive tech, and it brought in $19.8 billion in revenue in 2019, down from $21.1 billion the year before.

Xevo sells two products, Xevo Journeyware and Xevo Market, that allow drivers to interact with in-car content, while connecting them with popular food, fuel, parking, hotel, and retail brands via touchscreen and mobile apps. Xevo employed around 160 people at its Bellevue, Wash., headquarters and another 140 globally at the time the acquisition was announced last April.

Xevo was founded in 2000 by Satoshi Nakajima, who is known as the architect behind Microsoft products like Windows 95 and Internet Explorer 3. It rebranded in 2016 after the company acquired Seattle-based machine learning startup Surround.io Corp.

Apple acquires Xnor.ai: GeekWire broke news of the tech giant’s deal for the startup that specializes in low-power, edge-based artificial intelligence tools. Sources told GeekWire that Apple paid somewhere in the range of $200 million for Xnor.ai.

Based on technology developed at the University of Washington, and incubated at the Allen Institute for Artificial Intelligence (AI2), the startup streamlined and simplified the calculations needed for image recognition and other components of artificial intelligence. Devices using Xnor.ai’s technology, for example, are able to identify objects such as people, backpacks and vehicles without needing to rely on a network connection to a data center, or a device’s resource-intensive graphics processing unit. Instead, they can use a CPU on devices.

Xnor is the third Seattle startup Apple has acquired over the last few years as it has built up its presence in the region. Apple established its Seattle engineering center after it acquired Union Bay Networks, a stealthy cloud networking startup. The tech giant followed that up by acquiring Turi, which makes software that helps large and small organizations make better sense of the data they collect, also for about $200 million.

Vote in this and other categories above, and get your tickets to the GeekWire Awards here or below.

A big thanks to our longtime awards presenting partner, Wave Business, for supporting this fun community event. Also, thanks to gold and category sponsors: BCRA, EY, JLL, Premera, WSGR and Blink. And to our supporting sponsors First Tech Federal Credit Union, Bader Martin, Akvelon, Flyhomes and Moz. If interested in sponsoring a category or another component of the GeekWire Awards, please contact us at advertising@geekwire.com.