Nearly a year after stepping down as CEO of Seattle-based Zillow Group, Spencer Rascoff has turned his focus to the tech and startup scene in his hometown of Los Angeles, leading the launch of a news and events company to cover it all: dot.LA.

Rascoff moved back to the city about four years ago, and he’s been impressed by the size, breadth, diversity and vibrancy of the tech scene. As the executive chairman and co-founder of the new media venture, he thinks the time is right for Southern California tech. 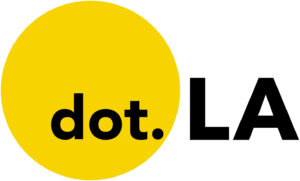 “It seemed to have all the ingredients for what was likely to be a boom decade in tech,” Rascoff said of L.A. during an interview this week. “But it lacked journalism. And the steady drumbeat of media coverage is a critical component of a vibrant tech scene.”

GeekWire also invested in the round as part of a broader collaboration with dot.LA, and Rascoff credited the Seattle-based technology news site with helping to inspire what he and his team hope to accomplish in the region where he grew up.

Rascoff, who spent nine years as CEO of Zillow before leaving last February, said he wanted to raise funding from a large group of investors, primarily from Southern California, to give the tech community a stake, literally, in the venture’s success. While he has also invested his own time and money in dot.LA, it is not a full-time gig for him.

“I’ve chosen not to make myself CEO. I don’t think I’m the best-qualified CEO of a local journalistic enterprise,” he said.

That role will fall to co-founder Sam Adams, a former financial journalist and strategy consultant. As CEO, Adams oversees business operations for dot.LA, responsible for building a sustainable enterprise around events, sponsorships and proprietary data.

The news operation is headed by editor-in-chief Joe Bel Bruno, a veteran of The Wall Street Journal, Los Angeles Times, The Hollywood Reporter and Variety. He’s excited about the prospect of filling L.A.’s news void when it comes to tech coverage.

What matters in Los Angeles certainly matters to anyone who pays attention to entertainment, but also gaming, food tech, consumer tech, fashion, retail and ad tech. In addition to the tech operations of major entertainment companies based in L.A., Rascoff notes that companies such as Amazon, Google, Facebook, YouTube and Netflix also have a huge presence in the region.

“A lot of the innovation coming out of those companies is coming from their L.A. offices, because this is headquarters for all the streaming services,” he said.

Dot.LA is championing a shift from the prevailing mentality that has always put Silicon Valley at the center of the tech universe. Rascoff predicted that in 2030, people will look back and say that the 2020s were to Los Angeles as the 2000s were to San Francisco: “A boom decade of innovation, of tech, of startups and venture capital — the decade that really puts Los Angeles on the map in terms of its first-class status as a tech city.”

“I think San Francisco is going to become flyover country,” he said. “I think tech and innovation is going to happen in places like Los Angeles.”

Dot.LA will rely on a website, newsletter and stable of podcasts as chief distribution methods. Rascoff plans to reboot his “Office Hours” podcast, where he interviews founders and CEOs, and will come out with a new season that is L.A. focused. The company will also put on local events as a physical incarnation of the product, and partner with major conferences.

The company has hired several experienced journalists: Tami Abdollah, who covered cybersecurity for the Associated Press; Ben Bergman, a veteran of NPR and KPCC; Rachel Uranga, who came to dot.LA from the Los Angeles Business Journal; and Eric Zassenhaus, managing editor for digital and reader engagement, most recently worked at Pacific Standard.

Dot.LA is actively looking to fill additional reporter/editor positions. It’s headquartered at a co-working space called Cross Campus in Beverly Hills, with another location in downtown L.A. as a satellite office.

“What’s amazing about that is there are so many startups working in our office buildings,” Bel Bruno said. “We’re already meeting people that we’re writing stories about.”

Investors in the company signed a journalistic integrity pledge, acknowledging the independence of the dot.LA newsroom, intended to preserve its ability to operate without influence from the company’s backers.