Boeing’s next-generation 777X wide-body jet completed its first flight today, providing a boost to the embattled company amid the 737 MAX crisis — and drawing rave reviews from its pilots.

The plane took off from Paine Field in Everett, Wash., next to Boeing’s wide-body jet assembly plant, headed eastward over Washington state and featured several rounds of maneuvers, including a photo op near Mount Rainier.

Chaney said he would have stayed up longer if he could. “The moment we lifted off and got into the air, I thought, ‘Man, this is amazing.’ ”

“Amazing” was also the word that co-pilot Craig Bomben, who serves as Boeing’s vice president of flight operations and chief test pilot, used to describe the landing.

“We came in under fairly tough conditions,” Bomben said. “Bounced around a little bit, took turbulence [but] the airplane went right through it.”

Of course, that’s what you’d expect the pilots to say. The real verdict will come over the next couple of years, when Boeing hopes that airlines will look beyond the engine issues that forced delays in the development program and add to the 340 orders and commitments already received for the 777X.

“This airplane, for me, is the flagship of the big airlines around the world,” Wendy Sowers, director of marketing for the 777X, told reporters in advance of the flight. “It’s really the marquee airplane.” 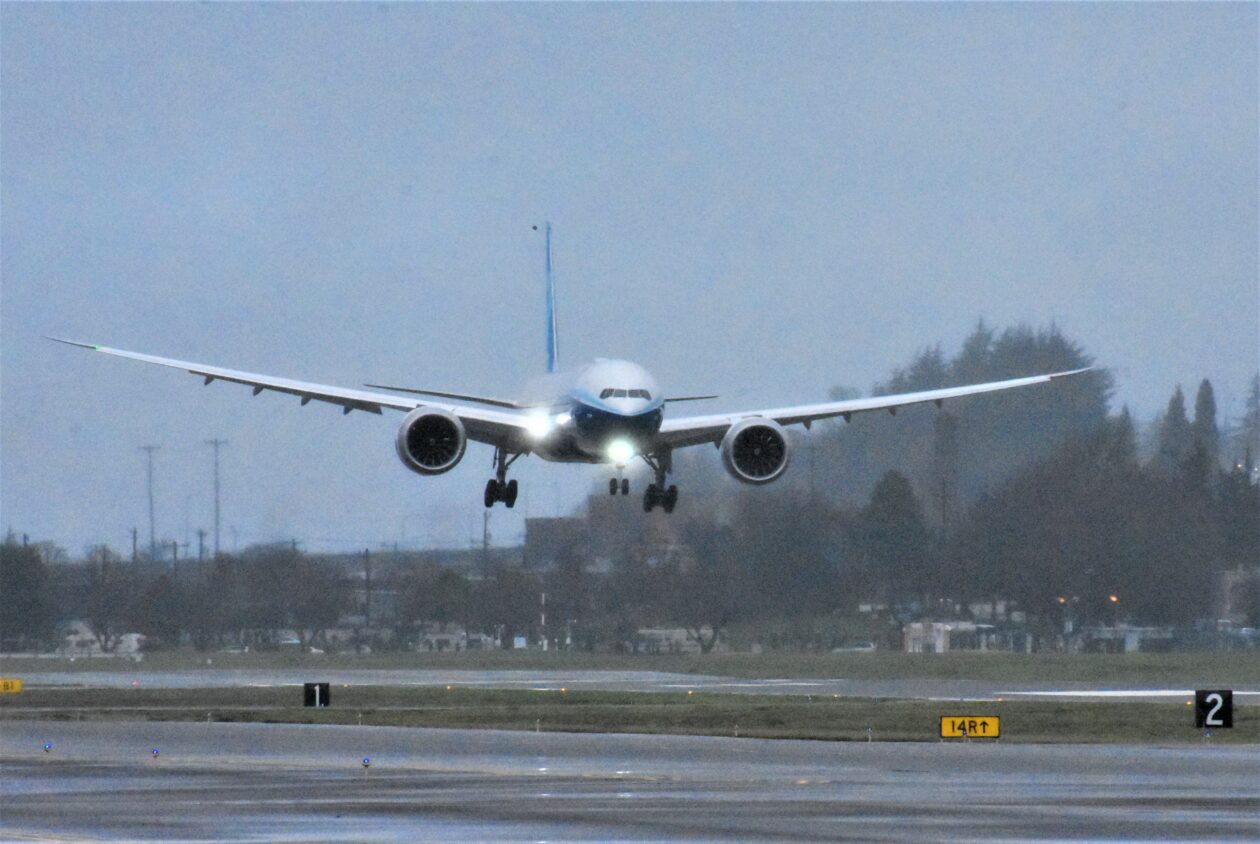 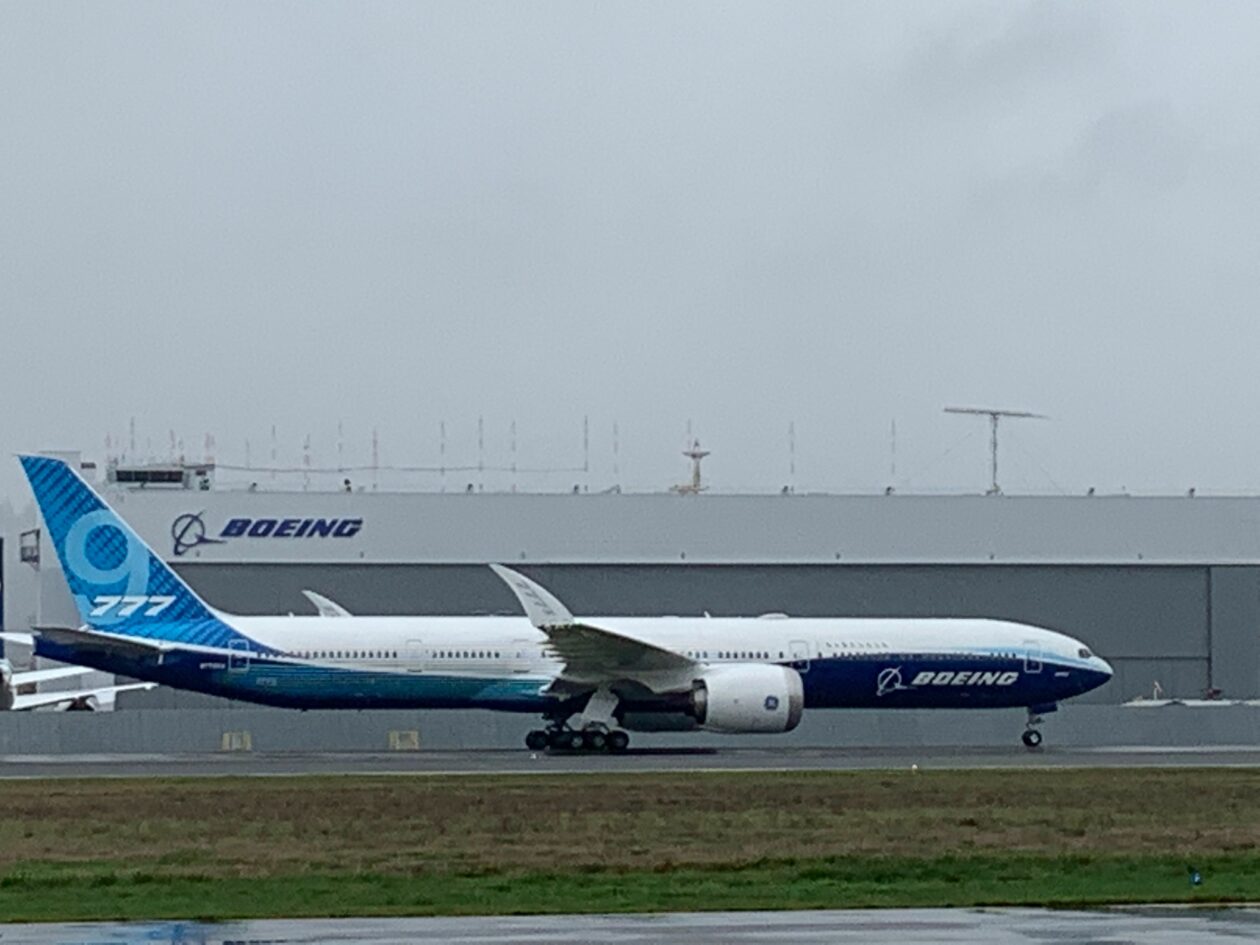 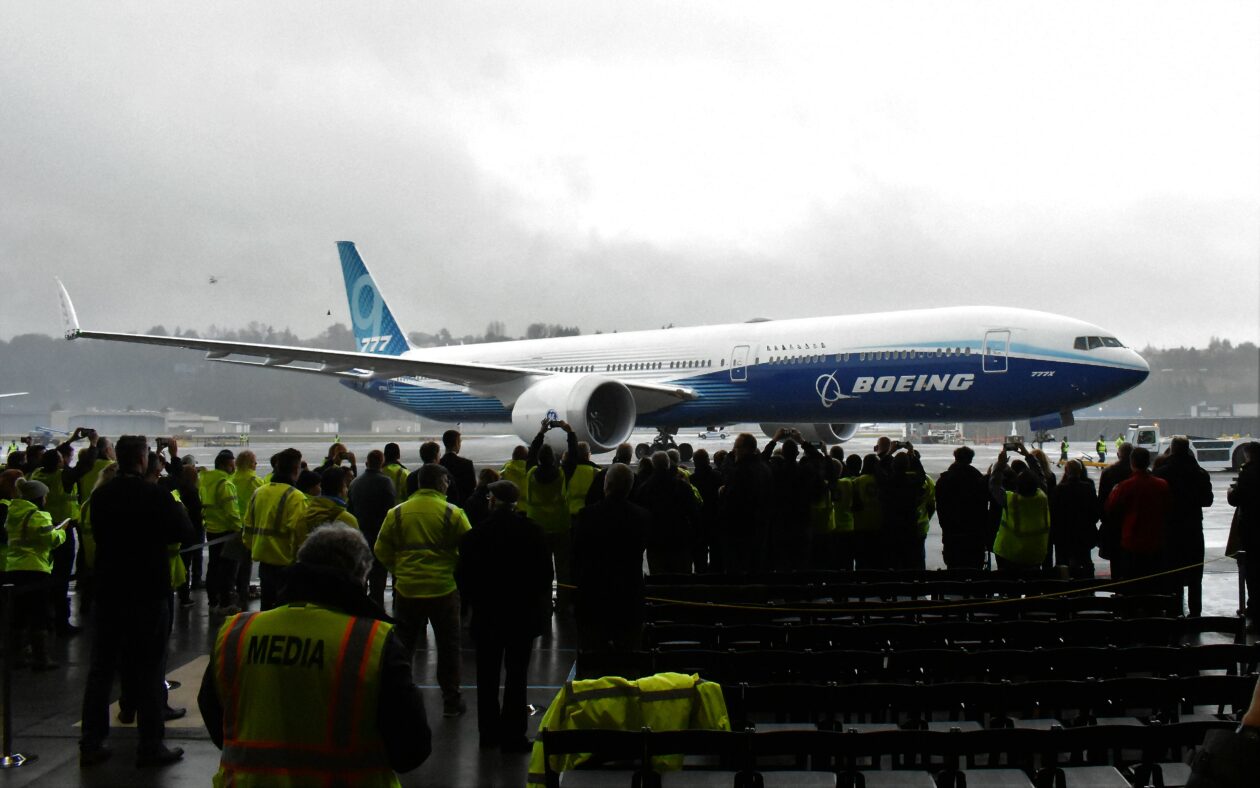 After its landing, Boeing’s 777X jet pulls up just outside a hangar at the company’s Seattle Delivery Center, where VIPs, employees and journalists await. (GeekWire Photo / Alan Boyle) 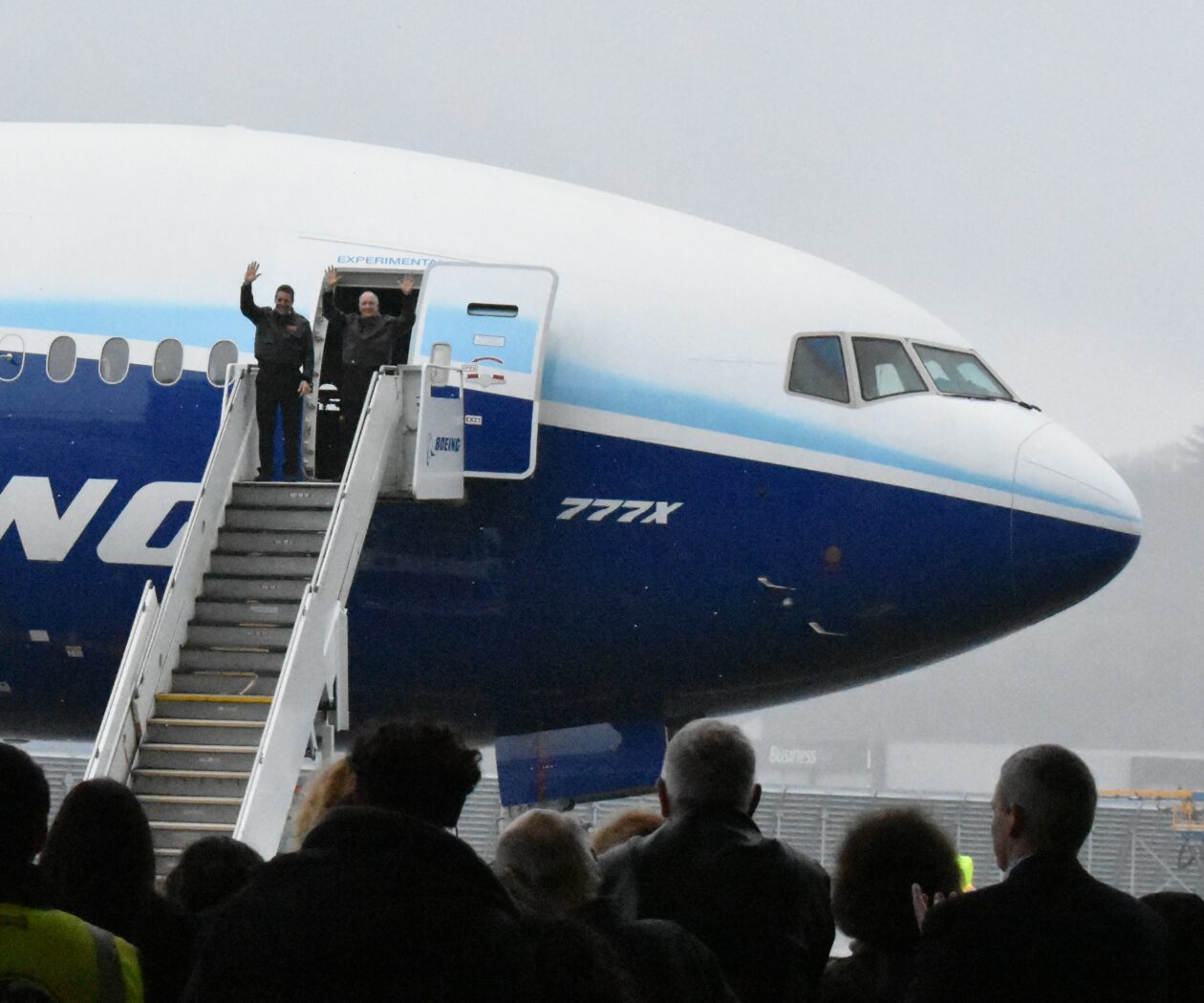 Boeing test pilots Van Chaney and Craig Bomben wave from the top of a stairway leading up to the 777X’s cockpit. (GeekWire Photo / Alan Boyle) 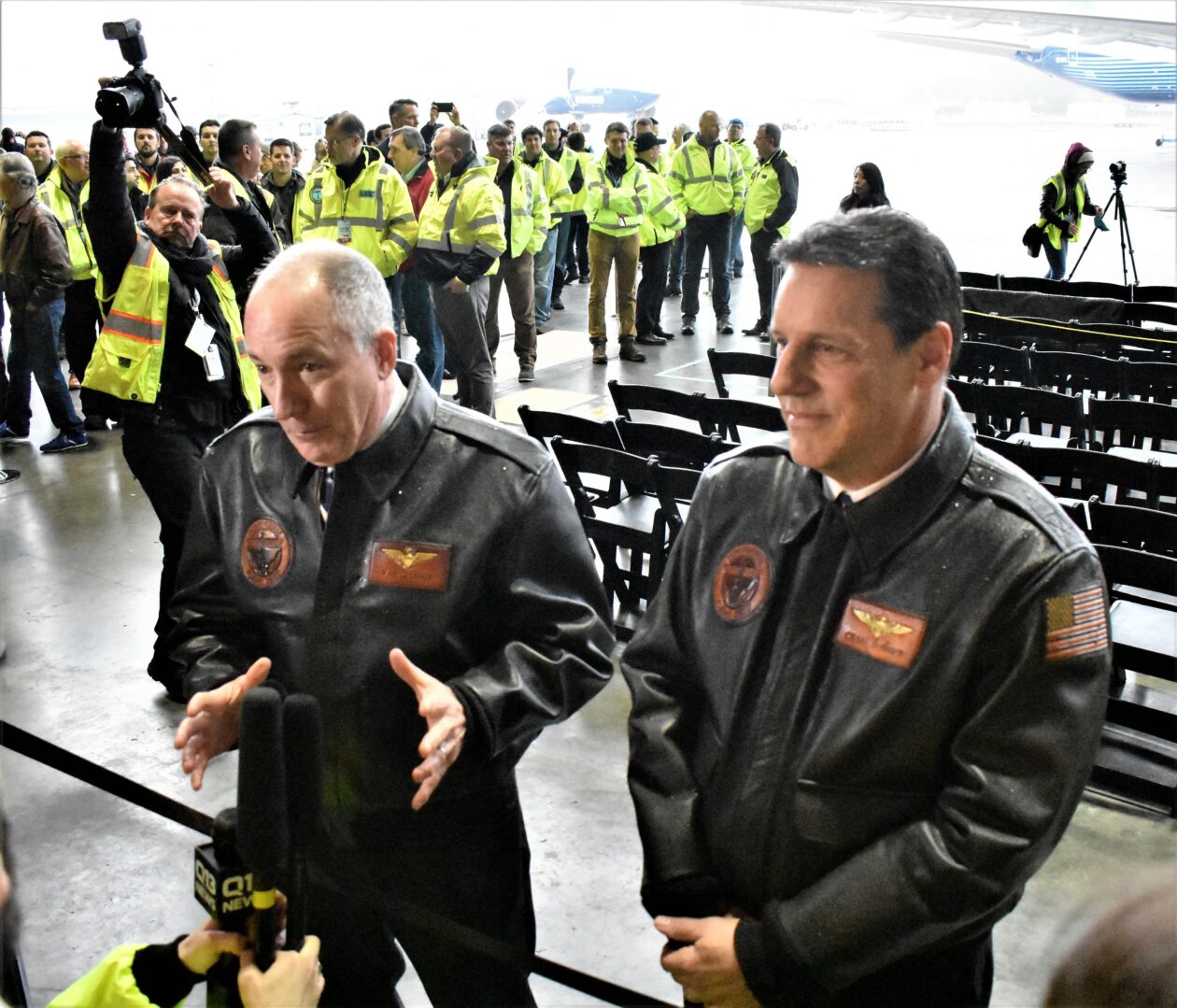 This map traces the course flown by Boeing’s 777X jet during its first test flight, which began at Everett’s Paine Field and ended at Seattle’s Boeing Field. (Boeing via YouTube)

The 777X represents a major update for the Boeing 777, which has essentially taken over the title from the 747 as the biggest passenger airplane that Boeing makes. The “Dash 9” model that had its first flight test boosts the typical maximum seating capacity from the 777’s 365 to as many as 426.

Thanks largely to its twin GE9X engines, the 777X improves the 777’s per-seat fuel efficiency by about 13 percent, Boeing says.

The plane’s 235-foot-wide wings are the longest that Boeing’s ever built, and they’re made of cutting-edge carbon composite. The wings are so wide that they have to be built with 11-foot-long hinged tips that are raised when the plane pulls into a standard airport parking spot and lowered for flight.

Boeing also adapted technological advances from its slightly smaller 787 Dreamliner, which entered the market in 2011 after the introduction of the 777. Those advances range from the look of the flight deck to the size and workings of the passenger cabin’s windows.

“I think it’s going to be a very comfortable, quiet airplane,” Chaney said.

The 777X’s first flight brought hundreds of onlookers to Boeing’s Future of Flight Aviation Center, within sight of the company’s Everett plant. “It went straight up!” one of the spectators exclaimed after watching the plane roar down Paine Field’s runway and rise into a hazy sky at 10:09 a.m. PT.

Today’s milestone comes after years of development, and marks the first off-the-ground step toward certifying the plane for operations. Sowers said Boeing will be applying the lessons learned from the issues that came up after two catastrophic crashes force the worldwide grounding of the 737 MAX fleet 10 months ago. The Federal Aviation Administration still hasn’t signed off on the software fixes and training procedures that’ll be required for recertifying the 737 MAX.

In contrast, Bomben said he expected the 777X certification process to go smoothly.

“We’re going to follow the normal processes we always follow,” he told reporters. “We’ll work with the FAA, and they’re going to work hand in hand with us. … I think we’re going to march through flight test successfully and quickly, and get certified by FAA standards.”

If all goes well, the first deliveries will be made in 2021. But all doesn’t necessarily go well, as illustrated by the one-day delay in the first flight. Thousands of Boeing workers and VIPs turned out on Friday to watch the takeoff, only to walk away frustrated more than three hours later.

Amid rainy and breezy weather, the 777X rolled out majestically and took its position at the south end of the Paine Field runway. Boeing waited for Friday morning’s weather to settle down, but it never did.

Boeing officials said winds from the south had to drop below 10 knots (11.5 mph) before the final go-ahead was given. The situation was complicated by the fact that the plane had to take off to the north and fly over water rather than populated areas, as a safety precaution. A tailwind blowing to the north could have reduced the 777X’s lift too much to be safe for a first takeoff.

While the 777X’s test pilots waited, a succession of planes, including Alaska Airlines passenger jets and Boeing’s mammoth Dreamlifter transport plane, landed from the north and took off to the south — taking advantage of the same winds that were keeping the new plane on the ground.

The winds stayed in the range of 13 to 18 knots, at times gusting in the range of 30 knots. At 1:30 p.m., three and a half hours after the appointed takeoff time, Boeing called off the attempt and rescheduled for today.

“Actually it wasn’t so frustrating for us, but we felt bad for the employees,” he said. “To watch all those employees out in the weather … we felt like we let them down.”

Today’s turnout was lower — but so were the wind speeds. And although the skies were gray over the Seattle area, Bomben said the weather was great above the cloud cover.

Update for 6:35 p.m. PT Jan. 25: Stan Deal, the president and CEO of Boeing Commercial Airplanes, congratulated his team in an email with a passage that might well be relevant to the 737 MAX situation as well:

“When the new 777X enters service after a rigorous flight testing program, our customers and their passengers will put their trust in us every time they fly. The best way for us to earn that continued trust is by working every day to put safety, quality and integrity first in everything we do, honoring our commitments one airplane, one pilot and one customer at a time. Through transparency and living our values, we will continue to strengthen our culture, build our confidence and deliver for our customers.”

This is an updated version of a report first published at 10:15 a.m. PT Jan. 25. Along the way, we corrected the reference to Boeing’s Dreamlifter airplane (not the Dreamliner).